Get ready for the show of a lifetime! On Wednesday 25th April 2018, the Norweigan superstar Kyrre Gørvell-Dahll, better known as KYGO, will perform at the Red Rocks Amphitheater, on tour with his latest album, “Kids In Love”!! Featuring some very special support from Alan Walker, Kygo’s first headlining Red Rocks performance promises to be something extraordinary! Grab your tickets to see Kygo NOW, while stocks last! 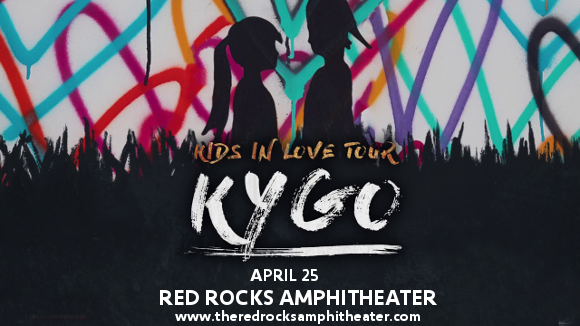 Making his debut appearance on the Billboard 200 with his “Cloud Nine,” album from 2016, Kygo is one of the hottest riding stars in music right now. He went on to release the “Stargazing" EP containing collaborations with massive names including Selena Gomez and U2! Joining him on tour is producer/DJ Alan Walker, best known for his single “Faded" which achieved platinum certification in several countries!!

With the new album featuring collaborations from Bonnie McKee, John Newman, and the Colorado-hailing OneRepublic on the highly anticipated single “Stranger Things”, rumors have arisen that Ryan Tedder could make a special guest appearance at the Red Rocks show!!

Don’t miss out!! Grab your tickets to see Kygo and Alan Walker live today, while you still can!