Lake Street Dive bring their attention-grabbing, genre-bending, groove-infused music to Red Rocks Amphitheater once again on Sunday 26th September 2021! Having blown the crowd away when they first headlined the venue two years ago, they are back for another round of songs in glorious technicolor! Fronted by vocal powerhouse Rachael Price, the band veers effortlessly through a wide variety of sounds, bringing equal passion and vitality to each tune! They'll be joined by special guest support act The Wood Brothers! 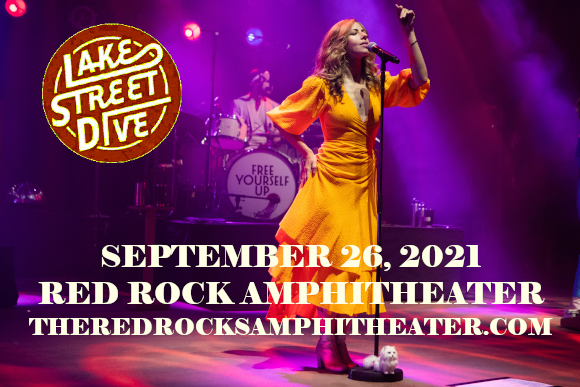 Boston band Lake Street Dive was formed in 1994 by Rachael Price (lead vocals), Mike "McDuck" Olson (trumpet, guitar), Bridget Kearney (upright bass), and Mike Calabrese (drums), and now also features Akie Bermiss (keyboards). Originating at the New England Conservatory of Music with the intention of performing free-form country music, the band slowly blended its eclectic influences to play with a unique sound that encompasses neo-soul, pop, rock, jazz, folk, and funk. The group released its self-titled studio debut album in 2010, having previously self-released 2007's In This Episode… and 2008's Promises, Promises. They really began to build a buzz around them with their 2012 covers EP, Fun Machine, which features versions of songs like Hall & Oates' "Rich Girl" and Jackson 5's "I Want You Back." A video of the group performing the latter on a street corner went viral on YouTube with over five million views, widening the group's fanbase. Since then, the band has released four more records, its most recent being 2018's Freak Yourself Out.