She's one of the biggest singers from the 1990's and an absolute inspiration for many songwriters, especially Hiphop, the one and only – Lauryn Hill! And she's coming to Red Rocks Amphitheater on Wednesday 26th September 2018! Fans can't believe the news as their favorite female rapper heads on tour to celebrate her most popular album of all time! Tickets are on sale NOW – hurry! 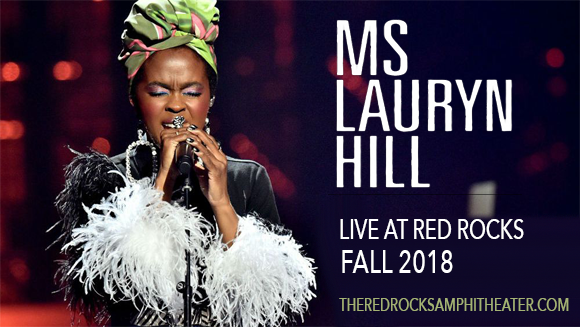 Red Rocks brings the incredible Lauryn Hill to the stage! Known for her long time career from her work as a rapper and vocalist for the Fugees and also as a solo star in her own shining glory! This wonderful artist made her mark and still to this day shines bright with The Miseducation of Lauryn Hill, which won numerous awards and broke several sales records. In 2018, she celebrates it's anniversary and with that comes a solid Summer/Fall tour to perform all of the tracks from the record, live in concert!! This is truly an unmissable show for any Lauryn Hill fan!

Brought up in New Jersey, Lauryn started off her music background with staring in the 1993 film, Sister Act 2, where her angelic voice was the centre for the movie. Much like her part in the film, she also was an aspiring singer and later on in High School met Pras Michel and Wyclef Jean – the Fugees were born. Together they rocked the world with a 1994 release, Blunted on Reality and Grammy Award-winning The Score, released in 1996, within just 2 years of producing and releasing records, the band were one of the biggest in the Hiphop scene at the time in the US and this step pushed Lauryn Hill into the limelight. With her feature on the Fugees cover of "Killing Me Softly."

In 1997 Lauryn left the group and started to progress towards a solo career. By 1998, she had already created the unforgettable album – The Miseducation of Lauryn Hill – now in 2018 she will bring it back for one night only at Red Rocks Amphitheater! Come and be a part of the special night…