All roads and bridges have been opened to make way for the tour bus of American soul singer, songwriter, record producer, and Grammy Award nominee, Leon Bridges. The "Coming Home" artist who rose to fame via Spotify, has had audiences' ears tuned in to his blend of Southern-style soul and original RnB flavour. With Leon Bridges' smoky vocals and enthralling stage presence, fans would truly delight as he gets on stage at the Red Rocks Amphitheater on Wednesday 6th October 2021. Come home to his music. Save the date and get your tickets now! 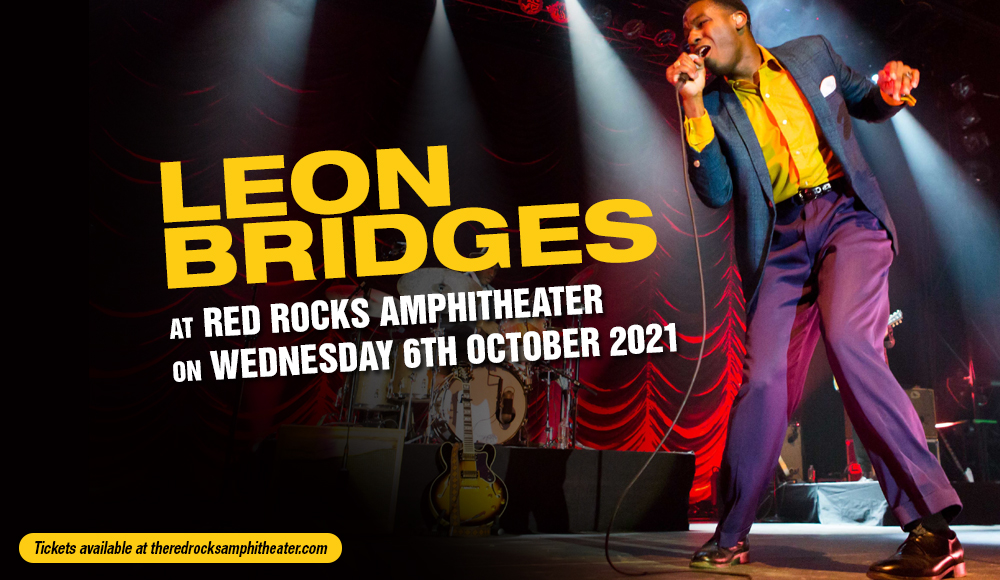 An old soul has crossed over to our time, harking back to American rhythm and blues, gospel and soul, sounding beyond his years, and reminiscent of ’60’s Otis Redding and Sam Cooke. But when asked about his musical influences, Leon Bridges reacts: "When I wrote 'Lisa Sawyer' I didn't know anything about old soul music," Leon says. "I was asked 'Is Sam Cooke one of your inspirations?' I had to say no, because I only knew Sam Cooke's 'A Change Is Gonna Come' from the movie Malcolm X, which I'd watched with my father. But from being asked about Sam Cooke and Otis Redding I started digging deeper into soul music from the '50 and '60s and realizing this is really the root of what I'm doing."

Leon Bridges' 2015 song "Coming Home", was a gem that fans quickly picked up as it became one of the Top 10 Most Viral Track on Spotify. As plays grew in number and followers expanding from many places, Leon Bridges also caught the attention of the music press, with Austin 360 describing his sound as "a transmission straight from the heart." With the strength of the singles "Coming Home" and "Better Man", The New York Times proclaimed is up and coming work as an "Album to Look Forward to From Texans".

Bridges' did not fail to deliver. His debut album, also titled Coming Home, was released on June 23, 2015, on Columbia Records, charted at No. 6 on the Billboard 200, No. 8 on the UK Albums Chart, and No. 8 in Australia, and was subsequently nominated for Best R&B Album at the 58th Annual Grammy Awards.

Now that Leon Bridges is on the tour map, book your tickets to join him on this soulful cruise. Click the 'Get Tickets' link on this site to get tickets right here, right now!