Combining the showmanship, excellent costuming and attention to detail of a theatrical performance with expert choreography and virtuoso musicianship, plus dancefloor rocking beats, Lindsey Stirling's live shows are not to be missed! This summer, the "hip hop violinist" comes to Red Rocks Amphitheater on Wednesday 7th July 2021 as part of her Artemis Tour, performing tracks from her brand new, chart-topping album! Creating a feast for all the senses, this talented multi-hyphenate has become well-known for her out-of-this-world performances – an absolute must-see event! 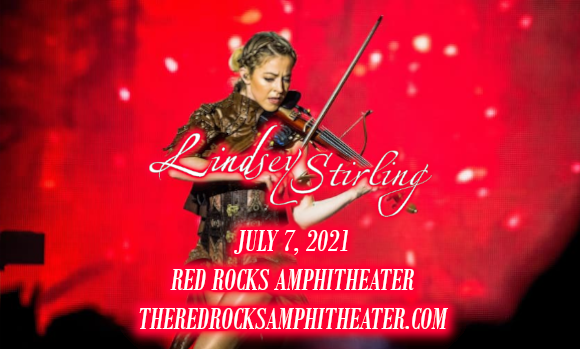 Lindsey Stirling is a woman of many talents, with her abilities spanning the musical, physical and visual arts. This singer, songwriter, composer, violinist, dancer and video editor first came to prominence via the televized talent competition America's Got Talent, making it through to the quarter-finals of the 10th season. After that, she used her platform to create high-concept videos as a way to widen her fanbase, uploading them to her YouTube channel, which now has 12.7 million subscribers and over 2 billion views. Stirling's music is a clever combination of classical music, dance music, hip hop and more, and she has become one of classical crossover's most successful artists. She released her self-titled debut album in 2012 and has released five studio albums to date, finding success across several Billboard charts. Two of her albums have hit the top five of the Billboard 200, four have reached number one on the Top Dance/Electronic Albums chart and the top five of the Independent Albums chart, and all five of them have reached number one on the Billboard Classical Albums chart. Artemis (2019) is her most recent release, and features collaborations with Elle King and Evanescence's Amy Lee.