The rap battle rages on! Ludacris & Nelly are picking up the rap and rhymes battle gear once more and moving the rap battleground onto the live concert stage. With fans still reeling in from the thrill of Timbaland‘s ‘Verzuz’ rap battle between Ludacris & Nelly, the rap meisters will take it up a notch as they hit the live concert stage of the Red Rocks Amphitheater on Wednesday 27th April 2022 (Rescheduled from Tuesday 7th June 2022). It ain't over 'til it happens live and in the flesh! If you enjoyed the live-streamed online rap battle, the intensity, and thrills will be magnified many times over. Lots of swag, razor-sharp rhymes, and hooky hip-hop beats will be coming your way from both camps. Whatever you're rooting for whether you're Team Nelly or Team Luda, this show is definitely a sure-fire winner! Don't be late for the game. Score those tickets now! 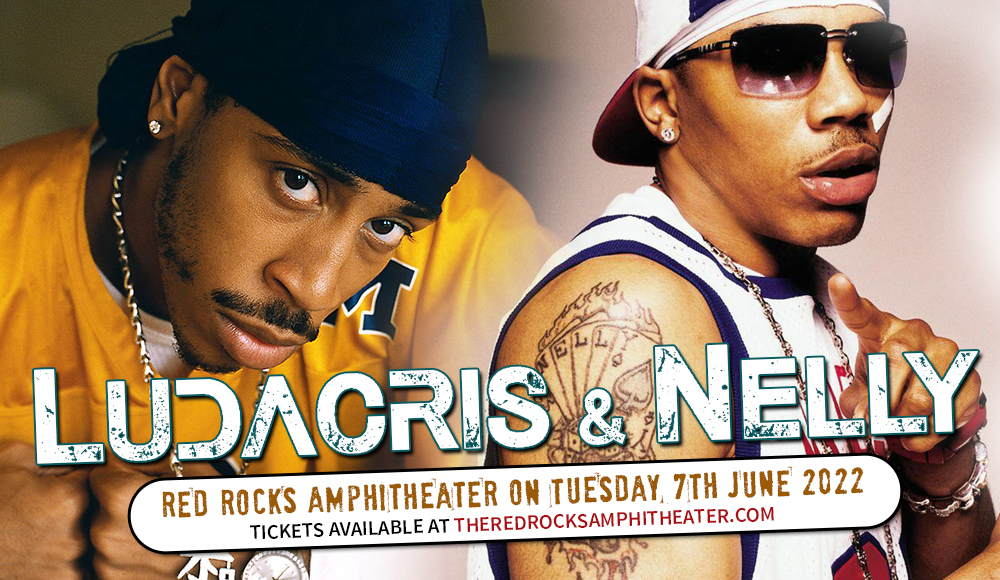 These rap titans are in for another face-off. Hip-hop fans were immensely thrilled to witness via live stream the rap battle between Ludacris and Nelly on Timbaland‘s ‘Verzuz’ rap battle. But it ain't over til it's over. Ludacris & Nelly are moving to a bigger and more intense battleground — the live concert stage! Now let's check out their arms and ammunition…

Christopher Brian Bridges a.k.a. Ludacris is known to be part of the Dirty South movement, and one of the first among his tribe to achieve mainstream success. Ludacris is an RIAA certified multi-platinum selling recording artist and has an MTV Video Music Award and three Grammy Awards tucked under his belt. His chart-topping singles include "Get Back," "Runaway Love," "Act a Fool," "Stand Up," "What's Your Fantasy?" "Area Codes," "How Low" and "Yeah."

Nelly's his solo career began in the year 2000 and kickstarted with the release of his debut album "Country Grammar" of which the featured title track and the single "Ride wit Me", which propelled the sales and chart action, debuting at number 3 and peaking at number 1 on Billboard 200. His sophomore album "Nellyville", rocket-launched his popularity further up the music stratosphere as the album spawned the number-one hits "Hot in Herre" and "Dilemma" (featuring Kelly Rowland). Other singles included "Work It" (featuring Justin Timberlake), "Air Force Ones" (featuring Murphy Lee and St. Lunatics), "Pimp Juice" and "#1". Music journalist Peter Shapiro lauded Nelly as "one of the biggest stars of the new millennium". The RIAA ranks Nelly as the fourth best-selling rap artist in American music history, with 21 million albums sold in the United States alone.

Back-to-back rap attacks from Ludacris and Nelly will hit hard and blow your brains with excitement. Don't you dare miss this! Book your tickets now!