Lynyrd Skynyrd comes to Red Rocks Amphitheater on Monday 28th September 2020 on the Last of the Street Survivors Farewell Tour! That's right, this will be your final chance to see the seminal Southern rock band take to the stage at Red Rocks, to perform a riotous last hurrah of hits, including classics like "Free Bird" and, of course, "Sweet Home Alabama"! An unmissable opportunity to experience the culmination of nearly 60 years in music, this show is an absolute must for all fans of the game-changing band, and the setting couldn't be more perfect! 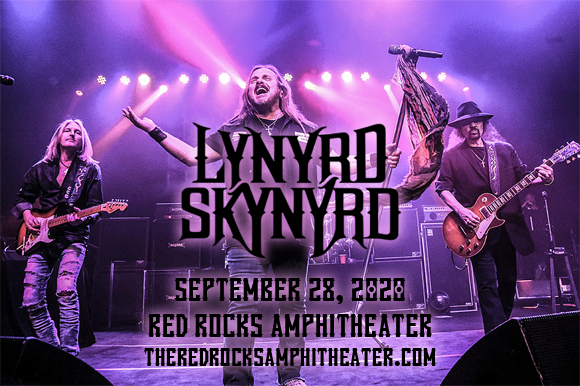 A name synonymous with Southern rock, Lynyrd Skynyrd came to fame with the release of their 1973 self-titled debut album (subtitled "Pronounced Leh-nerd Skin-nerd"), which launched the singles "Gimme Three Steps", "Simple Man", "Tuesday's Gone" and "Free Bird", the latter of which became a top 20 hit on the Billboard Hot 100 and also the band's signature song. The band had initially formed in 1964 under the name My Back Yard, and spend the latter half of the decade refining their sound until they became Lynyrd Skynyrd. Second Helping, their 1974 follow-up to their debut, was a further hit for the group, gaining platinum certification and launching another huge single – "Sweet Home Alabama". As the band reached its zenith in 1977, tragedy struck as frontman Ronnie Van Zant, guitarist Steve Gaines and backup singer Cassie Gaines lost their lives in an airplane crash. After the loss of their bandmates, the remaining members went their separate ways, but reunited 10 years later, officially reforming Lynyrd Skynyrd in 1987. Since then, the band has experienced several line-up changes but has remained actively recording and performing. The group announced its retirement from the road in 2018 and its current tour, the Last of the Street Survivors Farewell Tour, will be its last.