Mac Demarco comes to Red Rocks Amphitheater on Sunday 6th October 2019 on his eagerly-awaited new tour, performing previously unheard songs from his newest album Here Comes The Cowboy – his first release since 2017's This Old Dog! The record, which takes a more personal approach than his previous efforts is, according to Demarco, his "cowboy record":

“Cowboy is a term of endearment to me, I use it often when referring to people in my life. Where I grew up there are many people that sincerely wear cowboy hats and do cowboy activities. These aren’t the people I’m referring to.” 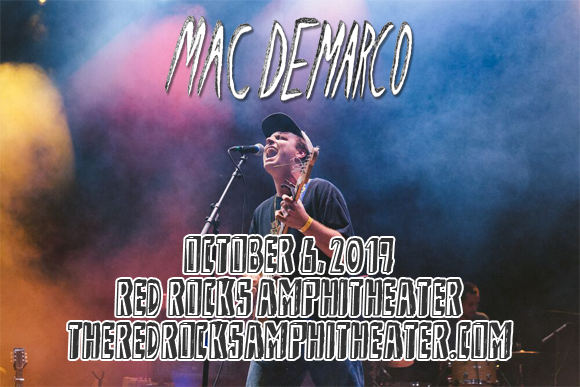 First coming to prominence in Canada's indie-rock scene in 2009 under the name Makeout Videotape, Canadian singer, songwriter and musician Mac DeMarco released his debut self-produced album Heat Wave to local acclaim, landing himself a deal with Unfamiliar Records. In 2011, he moved from Vancouver to Montreal and in January 2012 he signed with record label Captured Tracks, with whom he released a mini-LP titled Rock and Roll Night Club, followed by his debut studio album, 2 (2012), and then Salad Days (2014) and This Old Dog (2017). His fourth studio album, Here Comes the Cowboy, is due for release in May 2019.