North Carolina Americana duo Mandolin Orange will be performing at Red Rocks Amphitheater on Sunday 4th October 2020, bringing their heartfelt and uplifting blend of folk, bluegrass, and country to the stage for a night of music that touches the soul and goes deep down to the roots! Although they are no strangers to the Red Rocks stage, this is the first time the couple has headlined the prestigious venue, and they're bringing with them an incredible support line-up with Swedish singer-songwriter The Tallest Man On Earth and folk trio Bonny Light Horsemen! 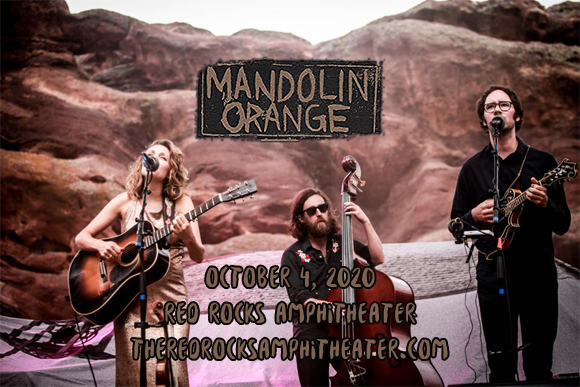 "Engineered to settle worried minds, slow the blood and lend an empathetic ear" with "songs about life lessons that feel lived-in and hard-won." – NPR

“A compelling tale of finding release and joy in spite of darkness and temptation…It’s a new step for the band, and one that’s rewarding to hear.”

"The Wolves" named a "Song You Need to Know."

“Time We Made Time” named one of the “10 Best Country and Americana Songs of the Week.” – Rolling Stone

“Now a decade into a career that has seen it help redefine American roots music for a younger generation, the duo Mandolin Orange has officially mastered blending engaging storytelling with acoustic elements of bluegrass, folk and country.” – The Washington Post