Guitar legend and former Dire Straits frontman Mark Knopfler comes to Red Rocks Amphitheater on Tuesday 10th September 2019! The iconic singer, songwriter and musician is touring to promote his ninth studio album, Down the Road Wherever, "which features 14 new songs inspired by a wide range of subjects, including Knopfler’s early days in Deptford with Dire Straits, a stray soccer fan lost in a strange town, the compulsion of a musician hitching home through the snow and a man out of time in his local greasy spoon diner!” Tickets available now! 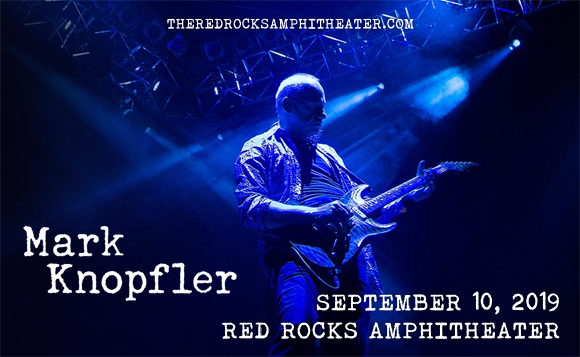 Scottish singer-songwriter, guitarist, record producer, and film score composer Mark Knopfler is known as the lead guitarist, lead singer, and songwriter for the rock band Dire Straits, as well as for his illustrious solo career. Dire Straights were active from 1977 to 1988, and again from 1991 to 1995, and became one of the world's best-selling music artists, with album sales of over 100 million. The band became known for a string of hits throughout the 1980s, including "Romeo and Juliet" (1981), "Private Investigations" (1982), "Twisting by the Pool" (1983), "Money for Nothing" (1985), and "Walk of Life" (1985). Since embarking upon his solo career, Knopfler has released nine studio albums, had several hit singles, and has been the recipient of several awards and accolades, including  the Edison Award, the Steiger Award, the Ivor Novello Award, and four Grammy Awards, as well as three honorary doctorate degrees in music from universities in the United Kingdom. Knopfler has produced albums for Tina Turner, Bob Dylan, and Randy Newman, and has collaborated with a vast array of prominent musicians, including B.B. King, Chet Atkins, Chris Botti, John Anderson, the Chieftains, Eric Clapton, Bob Dylan, Elton John, Bryan Ferry, George Jones, Phil Lynott, Donal Lunny, Van Morrison, Steely Dan, Sting, Emmylou Harris and James Taylor. He was inducted into the Rock and Roll Hall of Fame as a member of Dire Straits in 2018 and he was awarded the Order of British Empire by Queen Elizabeth II in 2000.