Fans of Jam music, we have the ultimate act coming up for you at the Red Rocks Amphitheater. moe. & Twiddle, accompanied by the super funky Pigeons Playing Ping Pong, are joining forces for an incredible performance at our iconic venue on Sunday 13th August 2017!! Tickets will sell out fast for this amazing event, so don’t delay – book your tickets to see moe and Twiddle NOW!! 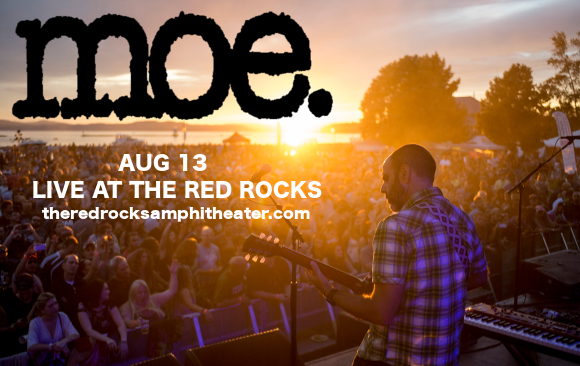 Formed of Rob Derhak, Al Schnier, Chuck Garvey, Vinnie Amico, and Jim Loughlin, moe. established themselves as one of the favourite acts of the 1990s jam and improvisational scene alongside acts such as Phish and Widespread Panic.When asked in interview to describe the band’s music, Al Schnier said; "It's an amalgamation of a wide variety of the history of rock, all regurgitated and recycled through the eyes, ears, hands, whatever of the guys in our band and all of that with a sense of adventure, a sense of humor, also a constant desire to push the envelope. All in this arena of taking chances, improvising live, and making things up on the spot.”

moe. have performed at a number of reputable venues and festivals. In 1997, they toured with the Furthur Festival, in 1999, played at Woodstock, have opened for The Who and The Allman Brothers, and performe at Radio City Music Hall on New Year's Eve 2006. They have also performed at Bonnaroo Music Festival a whopping 5 times!!

Joining moe are fellow jam acts Twiddle, already a well-established act in their own right, and Pigeons Playing Ping Pong, fast developing a following on the jam scene. For fans of improvised music this is a must-see show!!!