In an exciting return to the stage after an unexpected hiatus put their 2017 tour on hold, moe. comes to Red Rocks Amphitheater on Thursday 12th July 2018! Rob Derhak, the band's guitarist, is recovering from cancer treatment, but is looking forward to getting back on the road:

“It’s been a tough few months, and I couldn’t have done it without the overwhelming support of my family, and my famoe.ly. And although it’s still not clear what the future brings, the positivity and love that I’m feeling for moe.’s and my next chapter is beyond exciting. I feel like a kid counting down the days until Christmas, and our energy as a band, is like nothing I’ve experienced before. Thank you all for the well wishes, prayers, and healing vibes.” 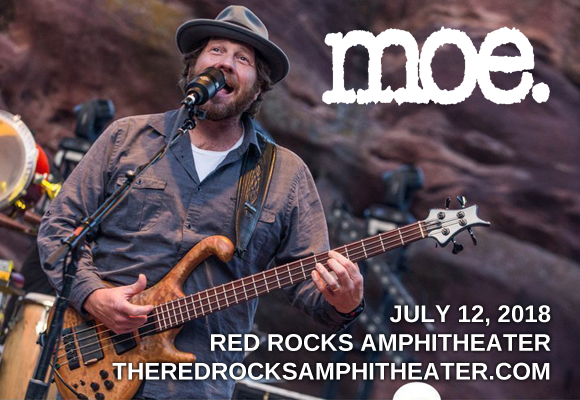 American jam-band moe. was formed in 1989, and established themselves as '90s improv-rock favorites with the release of their 1992 debut album Fatboy. Contemporaries of Phish and Widespread Panic, the band grew a faithful following from their extensive touring and their fans are affectionately known as “moe.rons”. To date, the band has released 11 studio albums and 11 live albums. Guitarist Al Schneider describes the band's music as: "…an amalgamation of a wide variety of the history of rock, all regurgitated and recycled through the eyes, ears, hands, whatever of the guys in our band and all of that with a sense of adventure, a sense of humor, also a constant desire to push the envelope. All in this arena of taking chances, improvising live, and making things up on the spot."