There's no spectacle quite like a Muse show! The classically-influenced British alt-rockers bring their stadium-sized sound to Red Rocks Amphitheater on Monday 18th September 2017, for a concert that will leave you spellbound and breathless! The trio hit the road this summer for a mammoth trek that sees them performing from May through September, and they'll be joined by the sensational 30 Seconds To Mars! 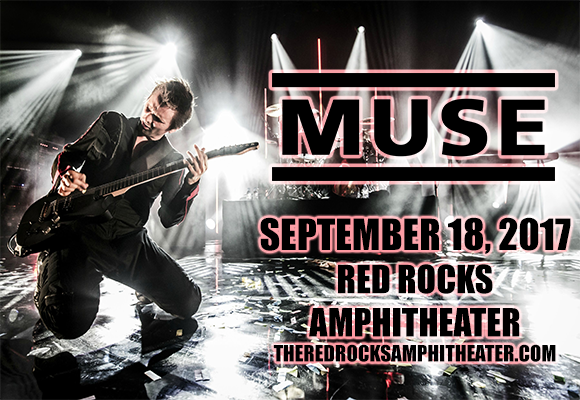 Muse are an English rock band, consisting of Matt Bellamy (lead vocals, guitar, piano, keyboards), Chris Wolstenholme (bass guitar, backing vocals, keyboards) and Dominic Howard (drums, percussion). Formed in 1994, the band released their debut album, Showbiz, five years later, but their mainstream breakthrough came in 2001 with Origin of Symmetry. The album went on to be certified platinum by the RIAA, and peaked at number 3 in the UK Albums Chart. Muse's following five albums have all reached the number 1 spot. The band has sold over 20 million albums to date, and has collected many awards and accolades over the years, including: two Grammy Awards (Best Rock Album for The Resistance and Drones), two Brit Awards (Best British Live Act twice), five MTV Europe Music Awards and eight NME Awards.