Rejoice, My Morning Jacket fans! Jim James and co have been quiet for a while as the lead singer has taken time off from the band to concentrate on his solo career, but the psychedelic indie rockers are back, and they're coming to Red Rocks Amphitheater on Saturday 3rd August 2019! Expect raucous jams and funky grooves from the Kentucky-based group, as they take to the stage for the second night in a row! 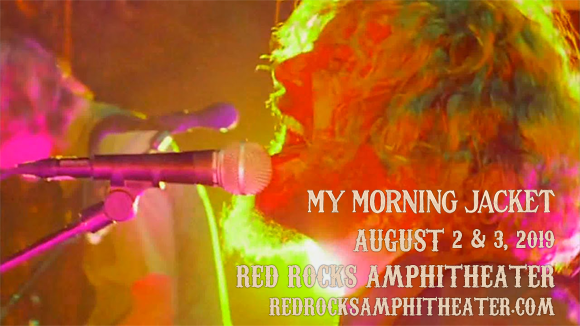 Consisting of vocalist/guitarist Jim James, bassist Tom Blankenship, drummer Patrick Hallahan, guitarist Carl Broemel, and keyboardist Bo Koster, American rock band My Morning Jacket formed in Louisville, Kentucky in 1998. James first brought the group together as an avenue for his acoustic music, as an alternative to his band at the time, Month of Sundays. The group released its debut album, The Tennessee Fire, in 1999, which found unexpected success in Belgium and the Netherlands. They followed with 2001's At Dawn, which expanded the group's success in the US. In 2000, the band signed to Dave Matthews founded independent label ATO records and has since released five studio albums on the label, including their most recent, The Waterfall (2015).