Nathaniel Rateliff & The Night Sweats have announced a North American tour for July-October 2021, featuring support from The Marcus King Band, Margo Price, Bahamas, Delta Spirit and Tré Burt. The tour will include a three night stint at Red Rocks Amphitheatre – an event that promises to be legendary. Dubbed "a Denver local folk-pop hero" by The New York Times, Nathaniel Rateliff is returning to his alma-mater for a three-night musical spectacle. Save the date – 25th of August – and come witness Red Rocks Amphitheater fill with his massive, alluring voice. Tickers are still available. 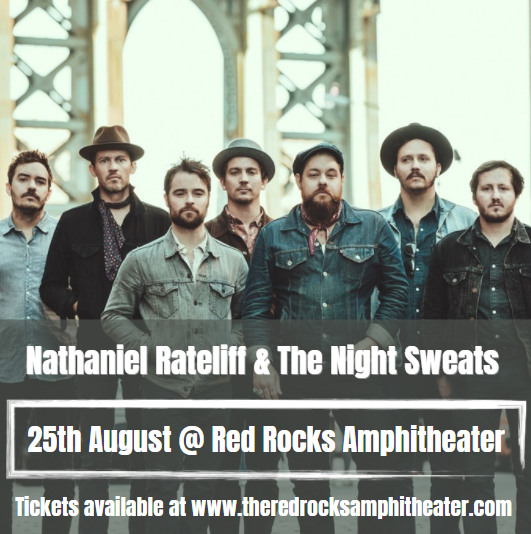 There are venues – and then there is Red Rocks Amphitheater. But what is truly so special about this place? Well, for one, the acoustics are near perfect. It is one-of-a-kind and its excellent acoustics are a result of the two giant monoliths that surround the seating area. Dubbed the Ship Rock and the Creation Rock, the sandstone structures are taller than Niagara Falls. And then, the views. As you climb up, excited to see your favorite band, you see the sun go down and think that's the beauty of it – but you haven't seen beauty until you've set foot at the Amphitheater and have seen the burning red sky between the red rocks, as if Mother Nature has burst into color.
And if this is not enough – as soon as you step foot, you're a part of history. Who hasn't heard of the legendary U2 concert when they performed in an "otherworldly red mist generated by the heavy fog and stage lights." Countless legendary bands have made some of their best memories there. Red Rocks is not a venue that enables an experience, IT IS the experience.