Grammy-nominated Christian rockers Needtobreathe are coming to Red Rocks Amphitheater on Wednesday 20th September 2017 as part of the Under the Stars their All The Feels Tour! Joined by singer-songwriter and "Soldier" collaborator Gavin DeGraw as support, the band had this to say:

"…we're coming back with longer sets, fully electric shows and some surprise special guests. Get ready y'all!" 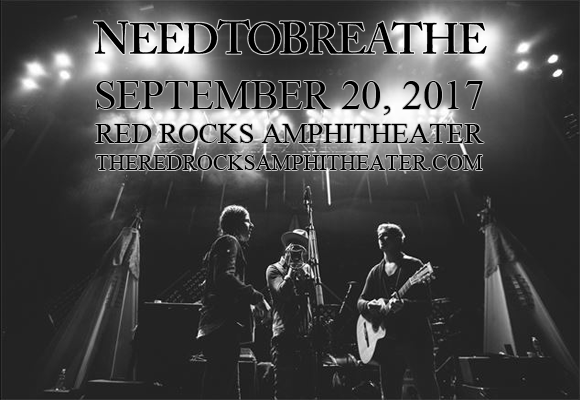 Needtobreathe are an American Christian rock band. Formed in Seneca, California in 1998, they have released six studio albums to date:  Daylight (2006), The Heat (2007), The Outsiders (2009), The Reckoning (2011), Rivers in the Wasteland (2014), and Hard Love (2016). The band have won 10 GMA Dove Awards and were nominated for the 2015 Best Contemporary Christian Music Performance/Song Award for "Multiplied". Their most recent album, Hard Love (2016), debuted at No. 1 on the Top Album Sales chart and at No. 2 on the Billboard 200 and became the band's highest-charting album.