Master showman and Neil Diamond tribute artist Jay White will shine like a diamond once again as he lights up the Red Rocks Amphitheater stage on Tuesday 23rd July 2019. Favored and endorsed by the iconic main man Neil Diamond himself, White's credibility has been sealed and he has proven time and time again that he has that uncanny clone-like essence and presence that has passed the litmus test, so to speak, of ardent Neil Diamond fans all over the world. Fans know that Neil Diamond may not always be on tour; hence Jay White is the closest thing to keep them company and entertained. Get your Diamond fix. Book your tickets now to get a full Neil Diamond experience you will never forget. 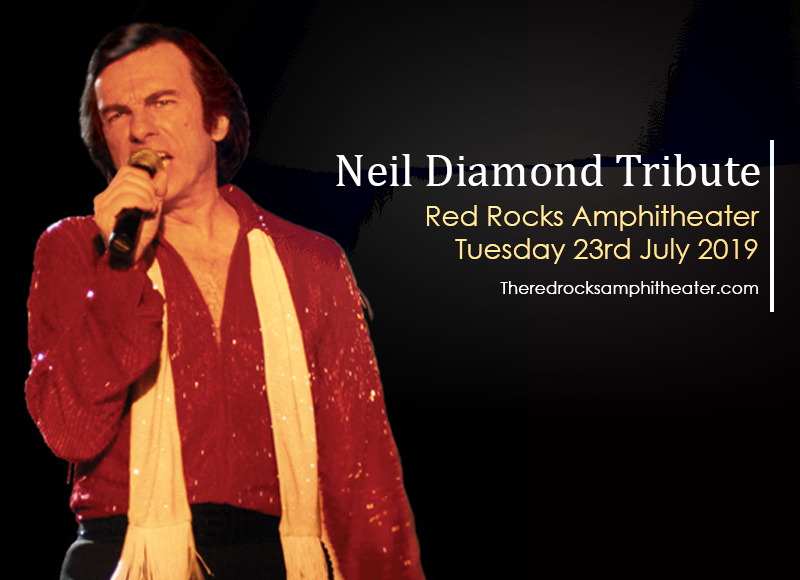 One of the rare breeds of tribute entertainers who got lauded and endorsed by the original artist himself — Neil Diamond, is none other than Jay White. Neil Diamond, in a 2002 interview when asked about his tribute performers, was quoted saying: "I've heard a few of them and I'm always complimented by their efforts and dedication, but my favorite is a young man named Jay White."

Jay White landed his first gig performing as Neil Diamond in 1982 at Mr. F's Supper Club near Detroit. Within six months, he was able to afford to quit his day job and pack his bags to fly to the live entertainment paradise — Las Vegas! From there, he took his Neil Diamond persona on the road. He trekked from Europe to Asia and hundreds of cities across the U.S. and Canada. He holds the record as the longest running act in one venue, where he played 50 weeks a year at the Imperial Palace for almost nine years.

Jay White has worked hard to get the right looks, sounds, and moves; but says all of it are rooted from an inner passion. "From facial expressions to body language to audience participation, it all needs to come together to form an exhilarating emotional experience. I love performing and I feel blessed to have such a wonderful and supportive family and fan base," explains White.

Neil Tribute tribute artists are like grains of sand –they're everywhere and everyone is entertaining in their own right. Yet Jay White is a rare gem, authenticated by the real Neal Diamond. Why settle for less? Go for the real deal. Catch Jay White's Neil Diamond Tribute at the Red Rocks Amphitheater on Tuesday 23rd July 2019. Grab your tickets now!