Are you ready for a brand new, all-star New Year’s celebration?! The Red Rocks Amphitheater is proud to announce its very first New Year's Eve On The Rocks, featuring performances from an incredible lineup including Migos, Post Malone, Young Thug & Lil Yachty!! The concert takes place on Sunday 31st December 2017 – limited tickets are still available, snap yours up while you can!! 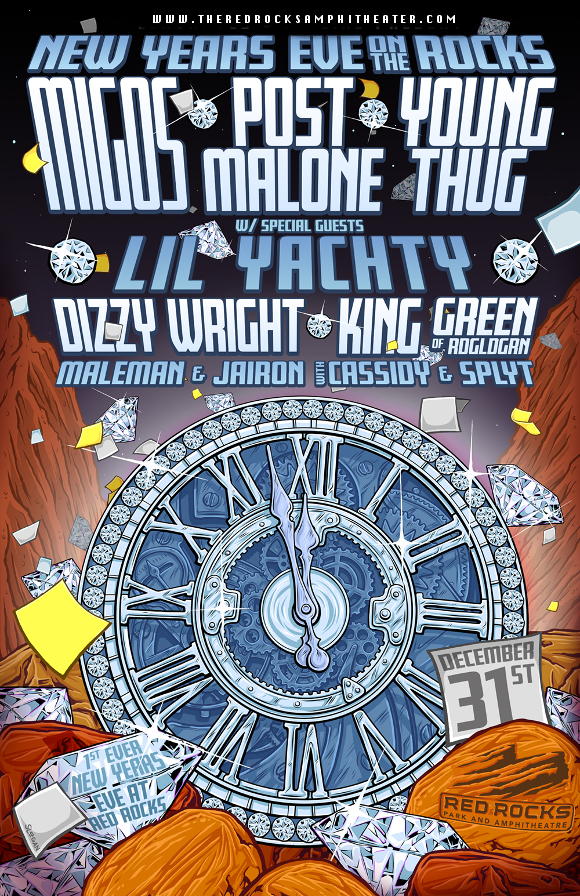 Headlining the show will be Migos. The trio, composed of the rappers Quavo, Offset, and Takeoff, first made waves on the hip-hop scene in 2015 with “Yung Rich Nation,” and hit the Billboard 200 just two years later with their single “"Bad & Boujee” followed by their best-selling second album, “Culture.”

Other massive acts on the bill include Young Thug and Post Malone. Revealing the title for his next album, “Beerbongs and Bentleys” earlier this year, Malone was all over the charts with his five-times platinum single “Congratulations”. As for Young Thug, he hit audiences across the world this year with his Drake-produced and star-studded mixtape “Beautiful Thugger Girls” featuring appearances from Future, Lil Durk, Snoop Dog, Jacquees, Millie Go Lightly, Quava, and Gunno!

Get ready to welcome the new year in style with some incredible performances from the biggest names in rap and hip-hop – don’t delay! Get your New Years Eve On The Rocks tickets NOW while they last!!