It's an EDM-lover's dream as Nghtmre & Slander back-to-back at Red Rocks Amphitheater on Sunday 5th May 2019! The two acts, both graduates of production school Icon Collective, will bring a pumping night of full-power bass, turning this iconic venue into a rave pit of epic proportions! Not only will there be a B2B with these titans of EDM, but they'll be joined by support acts AFK, Tisoki and Wavedash! 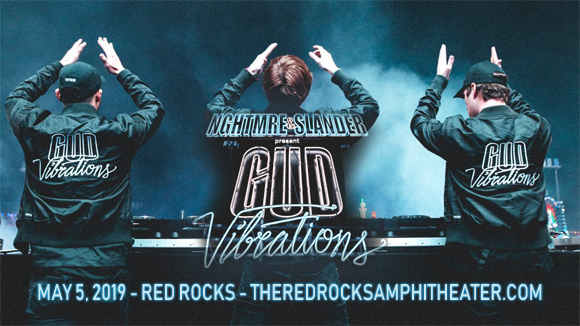 Going by the name of Nghtmre, American DJ and electronic music producer Tyler Marenyi became popular in 2014 for his trap and house remixes of well known tracks by Tiësto, Rae Sremmurd, and Skrillex. In 2015, Nghtmre was signed to Diplo's record label, Mad Decent, releasing his debut EP, Nuclear Bonds (a collaboration with fellow producer Slander), later that year. NGHTMRE EP, his debut solo effort, was released in 2016, peaking at number 17 on the US Billboard Top Dance/Electronic Albums chart. Since then, he has charted two Top 30 hits on the US Dance Chart: his collaborative single with producer Dillon Frances "Need You" (2016) and his 2018 single with The Chainsmokers, "Save Yourself". His most recent release was an EP with New Orleans rapper Pell, titled Magic Hour, released in June 2018.