EDM duo and Red Rocks favorites Odesza have been smashing it these last few months, and now they're bringing their fully immersive, mind-blowing tour to Red Rocks Amphitheater on Saturday 16th June 2018 for the second night in a row! The boys are performing as part of their A Moment Apart Tour in support of their epic new album of the same name! Expect an all-star cast of vocalists, spellbinding visuals, top notch tech and some serious beats! 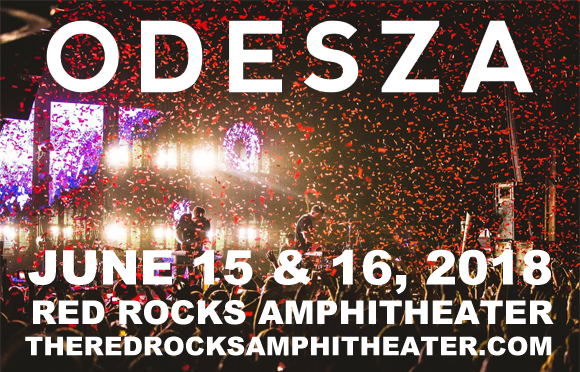 American EDM duo Odesza consists of producers and DJs Harrison Mills (aka Catacombkid) and Clayton Knight (aka BeachesBeaches), and formed in 2012. The duo's debut album, Summer's Gone, was released the same year, quickly hitting 1 million listens on Soundcloud. Soon after, they released 2013's EP My Friends Never Die, followed by their second studio album In Return in 2014, gaining an avid following along the way. The album launched the single "Say My Name" (RAC mix, which was nominated for Best Remixed Recording, Non-Classical at the 58th Annual Grammy Awards. Odesza's third studio album, A Moment Apart, was released in 2017.