Chromeo is bringing the funk this summer and this time they’re bringing another Colorado favorite, ODESZA to Red Rocks Amphitheater on Tuesday 26th May 2015!
A night of electronic genious mixed in with crunchy bass lines, blissful chillwave and the sweet sound of summer, don't miss out on this awesome joint line up! 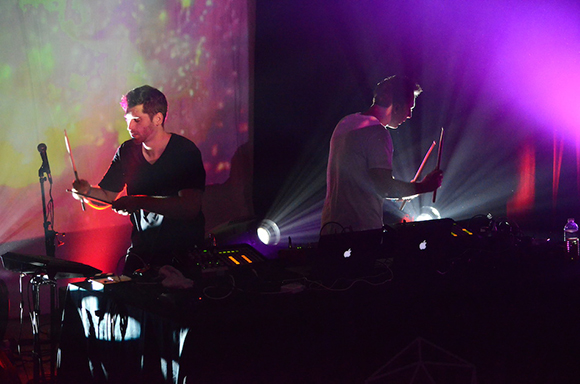 Canadian electro-funk duo, Chromeo are hot stuff. Their 2004 debut album, She's in Control, defined Chromeo and started their music career. Their sound is comparable to 1980s groups like Hall & Oates, Klymaxx and Sylvester. Their track "Needy Girl" became a worldwide club hit. They have made it clear that the name of their well-dressed game would be artful detachment, earnest songwriting, retro breakdowns, and gleaming plastic beats — not serious intent or aggressive musical-regime change.

Adding a heavier beat but keeping the "dreamy" side of indie electronica intact, Seattle duo ODESZA. In 2012, a striking new voice emerged from the wider surge of electronic music in the U.S. ODESZA’s Summer’s Gone stood out from the crowd; it was a collection of songs, not just beats; and its irresistible, startling dreaminess, addictive drums and fathoms-deep bass set it apart from the by-the-numbers brutality of EDM’s also-rans. In an age of manufactured internet buzz and carefully plotted hype, ODESZA’s story was refreshingly authentic: A brilliant new duo unveiled their music on the internet, and the world paid attention. A delicate balance between dreamy sun trickled melodies, glitched out vocals, crunchy drums and large sweeping basslines.