If you like your metal interesting, get ready for a treat of a night. Opeth and Gojira are joining forces to co-headline the Red Rocks Amphitheater on Thursday 11th May 2017!! Do not miss out on this HUGE concert – grab your tickets now!! 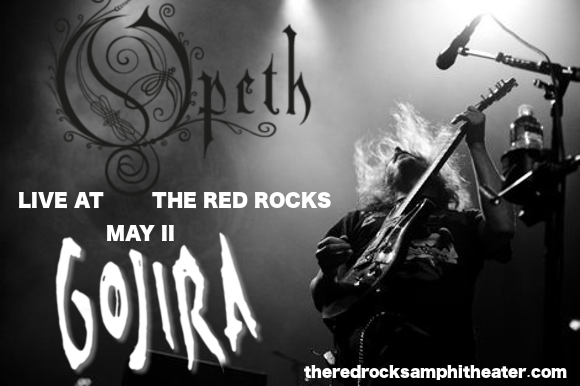 In support of their latest album; “Sorceress,” Opeth will be on top form. Band leader Mikael Åkerfeldt described it as; "a fine little record. My favorite in our discography right now. Of course. That's how it should be, right? It's both fresh and old, both progressive and rehashed. Heavy and calm. Just the way we like it.” Complex and difficult to define, Opeth’s latest album continues their almost 30-year long trend of mixing multiple styles and moods, including influences from folk, classical and jazz – genres many metal fans would perhaps otherwise be disinterested in – into their primary influences, especially at the start of their career, of death metal and progressive metal.

Gojira, similarly, are going through constant transformations in their music. Their latest album; “Magma,” is their most accessible (and best-selling) to date, featuring atmospheric guitar-led arrangements and clean vocals. The album, released in June last year, charted at 24 on the Billboard 200 and sold near 17,000 copies in the first week alone – and has been given the prestigious nomination for Best Rock Album at the 59th Annual Grammy Awards!! Mixing styles of progressive metal, groove metal, thrash and death metal, Gojira are another band that can’t be easily pinned under a label.

For metalheads who like to shake things up a little and have an open mind when it comes to the genre, Opeth and Gojira are the bands for you. Make sure you don’t miss out!