MASSIVE NEWS! EDM producer Opiuo is bringing his phenomenal unique sound to the Red Rocks Amphitheater on Saturday 21st April 2018 with incredible support from SunSquabi, Flamingosis and Anomalie! With a lineup like this at the world’s most visually stunning venue, this is one concert you can’t afford to miss. Get ready for a truly immersive experience this summer – get your tickets to see Opiuo, SunSquabi, Flamingosis and Anomalie live TODAY while they last!! 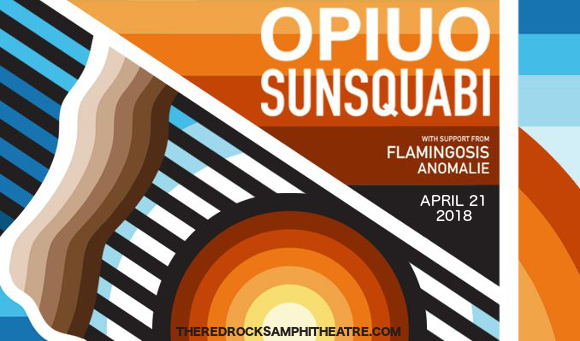 In 2017, Oscar Davey-Wraight (real name of New Zealand/Australian EDM artist Opiuo) released his single “Botrok,” getting fans very excited about the release of his new EP “Syzygy 01”! Starting out DJing his own material, over time Opiuo’s sound evolved to include a full live touring band. His debut EP, “Physical Symptoms,” gained him a reputation worldwide thanks to the record label Addictech. Now, he’s on tour with his third full-length album, 2016’s “Omniversal”!

Joining Opuo on tour are SunSquabi, the genre-busting EDM group infused with blues and funk. Taking influence from acts as diverse as King Crimson to Daft Punk, the group have gained a reputation for their incredible live performances and frequent festival appearances, in particular their iconic shows at the Red Rocks Amphitheater!

With additional support from Flamingosis, with their one-of-a-kind blend of disco, funk and electronic dance music, and Anomalie, the world-renowned keyboardist and producer, Opiuo and SunSquabi promise a night you’ll never, ever forget!! Don’t miss out – get your tickets to see this unbelievable lineup NOW while you still can!!