Tripped-out, psychedelic, jazzy electronica meets wobby, bass-heavy breaks as Papadosio & The Polish Ambassador head to Red Rocks Amphitheater on Saturday 11th May 2019! Two genre-defying acts, guaranteed to tickle your sonic tastebuds and get you grooving, in one of the most iconic venues on earth! Not only that, but they will be joined by Wildlight, Random Rab & The Penumbra Live Band! 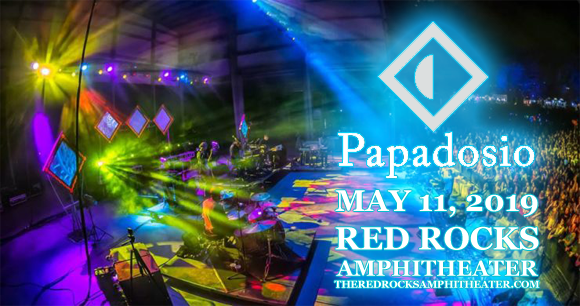 Blending a riotous concoction of rock, jazz, psychedelia and electronica to create what can only be described as “space rock”, Papadosio are an irreverent, high-energy act, hailing from Athens, Ohio. The quintet consists of singer-songwriter, guitarist and producer Anthony Thogmartin, bassist Rob McConnell, drummer Mike Healy and brothers Billy and Sam Brouse (keyboard, synth programming) and combined, their technical prowess meets organic musicianship in a complex, progressive and highly entertaining way. Known for their hugely popular and engaging stage shows and prolific stints on the road, the group has performed notable sets at Summer Camp, Sweetwater 420 Festival, Electric Forest, Camp Bisco, Peach Festival and more, driving their reputation as icons of the touring circuit.