The legendary artist that is – Paul Simon is coming to perform a very special LIVE concert at the Red Rocks Amphitheater on Wednesday 28th June 2017! You can NOW book your tickets for this incredible show where Paul Simon will be bringing all of his wonderful music to the stage, including hit songs such as "Graceland" "You Can Call Me Al" "Diamonds on the Soles of Her Shoes" plus so many more!

Don't miss this sensational evening… tickets are bound to sell fast for this unmissable event! 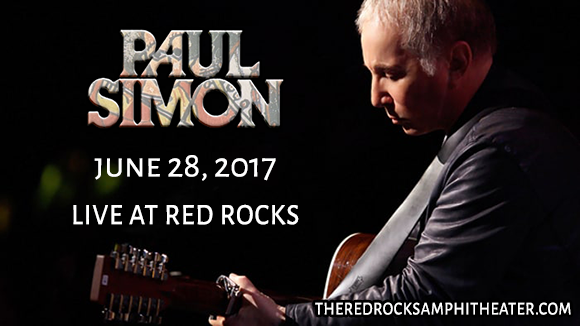 Paul Simon really needs no introduction as one of the biggest artists on the Folk scene and across the genre's with his groundbreaking music that has combined elements of sounds from Africa to form his own unique style that so many love and adore. This American born artist has become a world wide name and most people have at least one of his albums in their record collection.

Paul Simon is a true musician and a classic songwriter, first starting as a singer in Simon & Garfunkel and later under his solo name. He has written/co written some of the greatest songs to ever live, such as "The Sound of Silence", "Mrs. Robinson", and "Bridge over Troubled Water" all of which hit the number 1 position in the US.