Things are getting exciting at Red Rocks Amphitheater! The unparalleled talent that are – Portugal The Man & Local Natives they both head to Red Rocks Amphitheater on Sunday 18th June 2017!
Portugal The Man will be bringing their Alternative Rock to the stage – the energy is going to be electric! Tickets are still available, so get yours while you can! 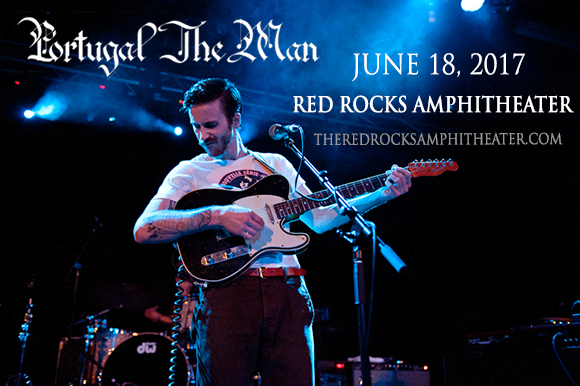 Portugal The Man are a band that are full of talent with their experimental yet hard hitting Indie Rock sound. Their sound has been heavily influenced by their background of a basic upbringing back in Alaska, with no distractions – artistic avenues became the height of entertainment and the best way to spend time. As many of us struggle to find the space and time to write, these guys sure didn't have that, a blessing for their music as it's meant their roots are solid.

Since their beginnings on the scene, they have signed with Fearless Records and had a successful release of two studio albums, but it wasn't until their sign with major label, Atlantic Records, when their career became serious and 'Portugal The Man' a world-wide name.