Psychedelic pop lovers, you’re in for a treat!! That’s right, Portugal. The Man are back and on tour with their latest album, “Woodstock,” with a special Red Rocks Amphitheater performance on Wednesday 8th August 2018!! Grab your tickets now for a truly unforgettable experience at the visually breathtaking venue in Colorado!! No booking fees for any tickets purchased on this website. 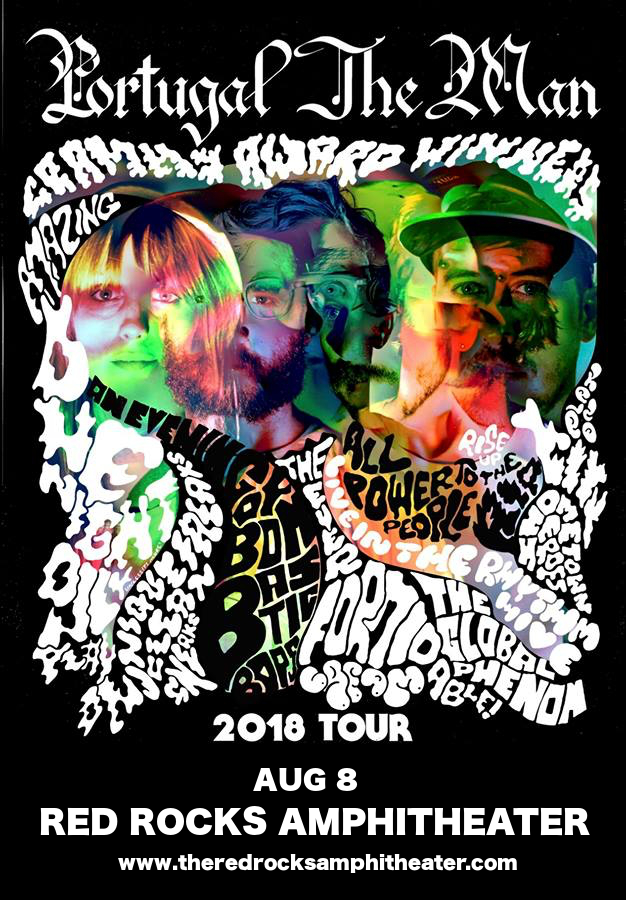 Formed in the early 2000s, Portugal. The Man have taken the world by storm with their distinctive, quirky, and constantly evolving sound. Their latest single, “Feel It Still,” won the Grammy Award for "Best Pop Duo/Group Performance" at the 60th Annual Grammy Awards.

After a steady output of one album a year, “Woodstock,” marks the first in four years from Portugal. The Man since “Evil Friends”, after the proposed new album “Gloomin + Doomin’ was put together and ultimately scrapped. “We went back and were really focused,” Zach Carothers explained. “We had an idea, we had a name. I realized the other day that we’ve always named an album first, and then we go in and make it. That’s what we need.”

It was worth the extra work – “Woodstock,” is a perfectly crafted, politically charged, Portugal. The Man classic. Grab a copy of it if you haven’t already and get ready to sing along with all the new songs live! What are you waiting for?? Get your Portugal. The Man tickets NOW while you can!!