Rap fans, you’re in for a treat. The hip-hop giants Post Malone and 21 Savage are co-headlining a MASSIVE tour across North America and beyond, hitting the Red Rocks Amphitheater on Wednesday 2nd May 2018! Don’t miss out – grab your tickets NOW while you can! 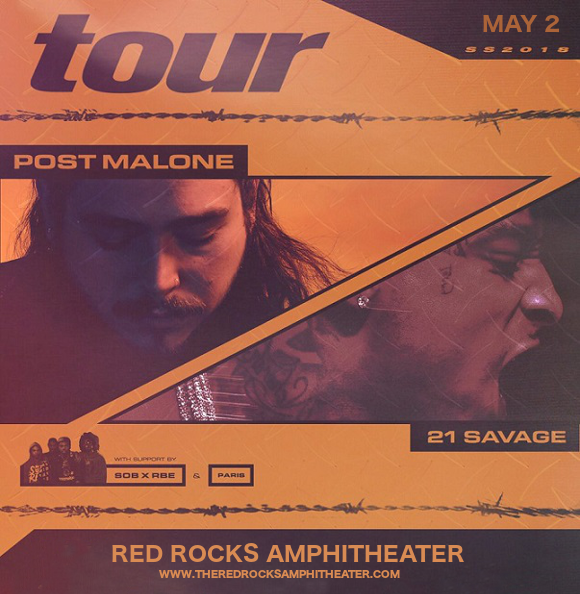 Kicking off on April 14th at the Coachella music festival the 28-date tour will take the two hip-hop legends across the country, hitting every state from Oregon to California, before hopping across the ocean to finally wrap things up at the Reading festival in the UK!

There couldn’t be a better headlining pair. In 2017, Post Malone released the phenomenal single “Rockstar,” from his upcoming sophomore album “Beerbongs & Bentleys", featuring 21 Savage. The song hit number one on the Billboard Hot 100 AND hit achieved the top spot in many other countries including Australia, the UK, Finland and Norway! We suspect that on this once-in-a-lifetime-tour, fans can expect to hear “Rockstar,” performed live by both rappers onstage, just like on the record!

It’s an event no Post Malone or 21 Savage fan is going to want to miss, and tickets are expected to sell out fast. So don’t delay – get those tickets NOW to be in that crowd!!