Get ready for a hard rock show like nothing you’ve ever seen before – the legendary Queens Of The Stone Age with support from the incredible alt rock duo, Royal Blood, are on tour, coming LIVE to the iconic Red Rocks Amphitheater on Tuesday 10th October 2017 for a night that you’ll never forget! Tickets selling fast – don’t delay in getting yours!! Hit the “Buy Tickets,” button to be sure of your place! 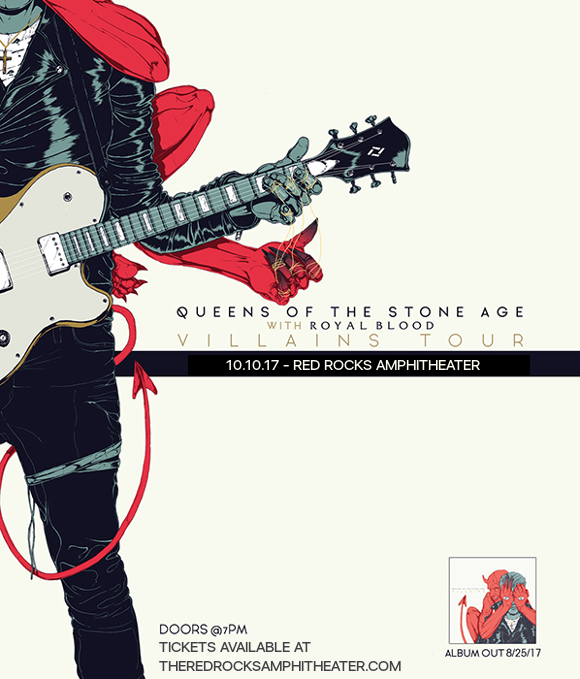 It’s been four years since the release of QOTSA’s last album, the critically acclaimed “…Like Clockwork.” Having drawn out fan anticipation to the point that was more than we all could bear, Queens Of The Stone Age finally released the first single, “The Way You Used To Do,” and are all set to go on tour with their brand new album, “Villains,” out August 25th.

“The most important aspect of making this record was redefining our sound, asking and answering the question ‘what do we sound like now?’,” said singer Josh Homme, describing the upcoming album. “If you can’t make a great first record, you should just stop—but if you can make a great record but you keep making records and your sound doesn’t evolve, you become a parody of that original sound.”

Known for their full-on live performances, Queens Of The Stone Age’s live show is going to be an experience you’ll never forget. What are you waiting for?? Be among the first to hear all the brand new material live – book your tickets TODAY!!!