Get ready for a MASSIVE night of trance, dubstep and chillstep at the Red Rocks Amphitheater!! With Seven Lions as headliner, three more incredible acts will get you ready for the main event – DJ’s Kill The Noise, Jason Ross and MitiS! It’s all happening on Thursday 11th October 2018 – tickets are in high demand and expected to sell out FAST, so don’t delay – click the “Buy Tickets,” button above and get yours NOW!! 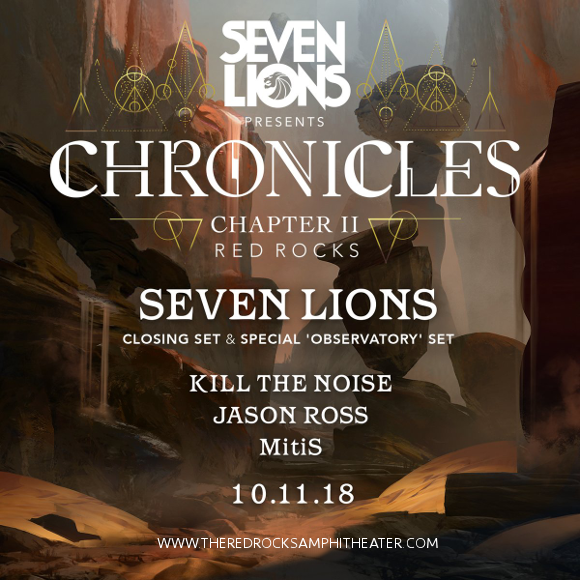 Initially a more traditional musician, growing up playing in bands, Seven Lions grew frustrated with the unreliability of band members and ventured out on his own into the field of electronic music – a move that successfully launched his entire career. In 2011, he started to release remixes of songs by prominent electronic artists such as Paul Van Dyk, Delirium, and Above & Beyond. The attention generated from these songs led Seven Lions to be signed with OWSLA, Skrillex’s label.

This year is going to be an exciting one for Seven Lions, as he announced in March that he would be founding his own record label, Ophelia, to release his music. His first EP on Ophelia is the stunning “Ocean,” a collaboration with fellow Red Rocks performer Jason Ross, including the tracks  "Ocean" and "The Sirens”.

It’s going to be an incredible show both visually and musically – audiences can expect an impressive sound and light show in addition to enough EDM to keep you dancing all night long!! Don’t miss out – get your tickets today!!