The most amazing news has been announced! Smashing Pumpkins & Marilyn Manson are coming to Red Rocks Amphitheater on Monday 13th July 2015! Joining their epic forces together on a summer 2015 tour, what could be more of a perfect combination than two of the biggest rock bands from the 1990's. Smashing Pumpkins & Marilyn Manson are both back to stay with fresh new albums as well as chanting their classic hits. Who knows, they might even re-create their version of 'Ava Adore'?! Get ready for a night to remember! 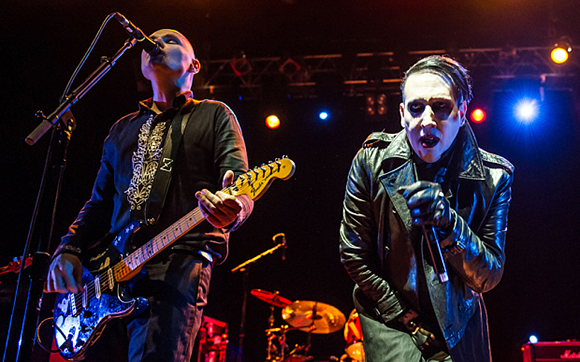 Marilyn Manson are one of the most iconic bands in rock history, known primarily for their frontman Marilyn Manson (Brian Hugh Warner), who's distinctive gothic image took over the metal scene in the 1990's. He has been described as 'Shock rocker', due to his outstanding look of colored contact lenses, layers of grease paint and black leather.
His controversy didn't stop there, he adapted it into his lyrics and stage shows alike. The radio hit with a hard-rock cover of Eurythmics' "Sweet Dreams", pushed his 1995 EP Smells Like Children to platinum. And with his third album, Antichrist Superstar, Manson became a huge rock star. His brutal lyrics and concepts of him being a rock god/the devil, appeared in tracks such as "Beautiful People" and "Tourniquet", his stage shows often included shocking performances and in one concert, Manson ripping out pages of the Bible. All of it combined led to his ultimate undying fame.

Smashing Pumpkins formed in 1988 in Chicago and have become pioneers of the 'alternative rock' sound. With their grunge infused guitar riffs, powerful drum beats and gritty vocals, Smashing Pumpkins are pretty recognizable. Their anthemic hits have sold more than 18.3 million albums in the United States alone and are considered to be one of the most commercially successful and critically acclaimed bands of the 1990s. Their music plays the calm before the storm, their beautiful slow melodies, infused with string parts, mimic a nostalgic feeling of a road trip which then turns into ground shaking heavy rock which brings out the rebellious side, making you want to jump into the air and never come down!