And now for something completely different… It's comedy time at Red Rocks Amphitheater, as two epicly funny men, Steve Martin and Martin Short, head to the 'Rocks on Monday 6th August 2018! The double-act, known for their work together in Three Amigos and Father of the Bride, invite you to join them for An Evening You Will Forget for the Rest of Your Life, with support from The Steep Canyon Rangers and Jeff Babko! Expect laughter, and banjos! 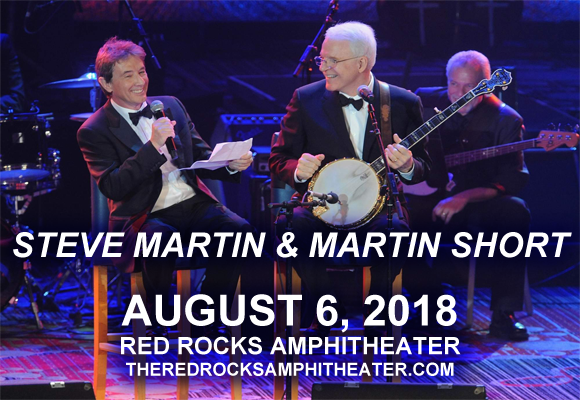 Steve Martin is an American Emmy, Grammy, American Comedy and Honorary Academy Award-winning actor, comedian, writer, producer and musician. Martin began his career in the '60s when he landed a job writing for The Smothers Brothers Comedy Hour, and quickly became a frequent guest on The Tonight Show. Throughout the 1970s, he found success in stand-up comedy, and his shows and national tours regularly sold out. Martin's popularity as a comedian made him a natural fit for comedy films, and he went on to break into the world of acting, with appearances in several hit films, including: The Jerk, Planes Trains and Automobiles, Dirty Rotten Scoundrels, Three Amigos, Father of the Bride and Father of the Bride Part II. A man of many talents, Martin is also an author, playwright, pianist, and banjo player. He released his first solo music album, The Crow: New Songs for the 5-String Banjo, in 2009, winning the Grammy Award for Best Bluegrass Album.