It's a winning combination as two of the most high-class acts around, Straight No Chaser & Scott Bradlee's Postmodern Jukebox, join forces for a Double Feature tour that comes to Red Rocks Amphitheater on Wednesday 4th October 2017! These two nostalgia-tinged bands present the songs we know and love with a sexy, vintage twist and phenomenal musicianship – this will be an incredible show! 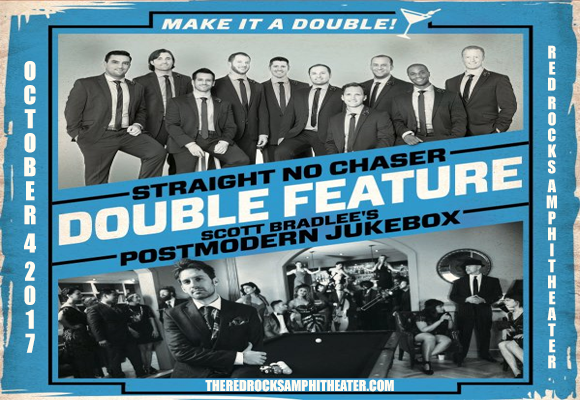 Known for their intricate, weaving harmonies, feats of incredible vocal skill, and fun covers of well-loved classics such as “Proud Mary,” “Shut Up And Dance,” and “Signed, Sealed, Delivered (I’m Yours) (feat. Stevie Wonder),” Straight No Chaser have earned their place as on of the top a cappella groups around! Formed at Indiana University in 1996, this ten-piece collective has perfected the art of a capella singing during their twenty years in the industry, and continues to sell-out shows and delight audiences everywhere they go! They have released six studio albums to date, including several holiday-themed records.