It's the second night of STS9 – Sound Tribe Sector 9's live fall shows at Red Rocks as they return back for another year to bring the crowd a mind blowing show! With their outstanding concerts they bring an effortless display of improvisation right before your eyes! Red Rocks is the perfect place for STS9 to showcase their music as they often have psychedelic lights and visuals to coincide with their performance… come and experience it all on Saturday 7th September 2019 – tickets are already flying for their limited 2019 dates! 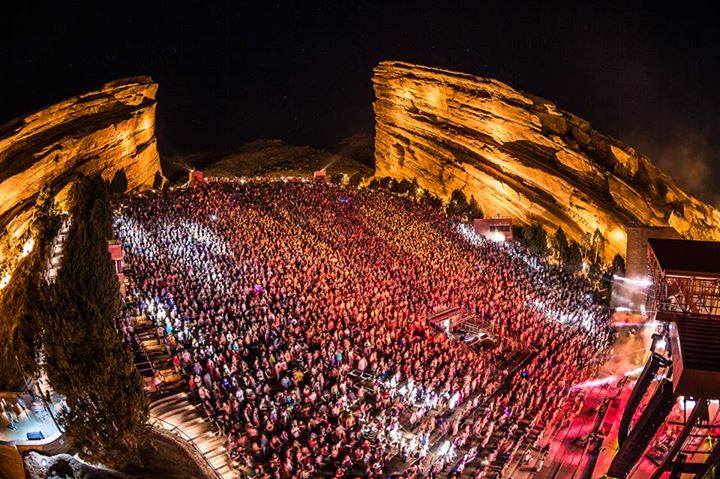 Sound Tribe Sector Nine (also known as STS9) is an instrumental electronic rock band that was formed in Atlanta, Georgia, in 1998. Fusing typical rock instrumentation with electronics, and with a passion for group improvisation, the band are known for their incredible live performances and extensive touring. They have ranked among Pollstar Magazine’s list of top-grossing touring acts and headline several festivals every year, having notably performed at Bonnaroo, Wakarusa, Electric Forest, and Suwanee Hulaween to name a few. To date, the band has released 11 studio albums, two remix albums, and multiple live DVDs on their independent label 1320 Records!

"If there is something Sound Tribe Sector 9 (STS9) does best, it’s taking a situation and not only making the best of it but going above and beyond by providing the audience with a completely unprecedented experience. It fueled the excitement for the following two-night run at Red Rocks."

For a band that’s been around since 1998, coming up with new concepts for their live performances could prove to be difficult. For STS9 'though, it’s the type of creativity they thrive on. The theme for Red Rocks was Cave of Crystals, “a cavern of dreams where we can explore new worlds and continue to discover what’s real & imagined.”