STS9 (Sound Tribe Sector 9) are returning to Red Rocks Amphitheater on Friday 8th September 2017!!! The dub-influenced psychedelic fan-favorites will be bringing their tripped-out, instrumental electronica and unbelievable light show back to Denver's premier venue for three nights in a row! Guests attending the Friday night concert will get to see them perform Artifact in its entirety, plus support from the incredible Nightmares On Wax (DJ set) and El Ten Eleven too, as well as Moon Boots, who will be performing in the round, as part of an unforgettable night of entertainment! 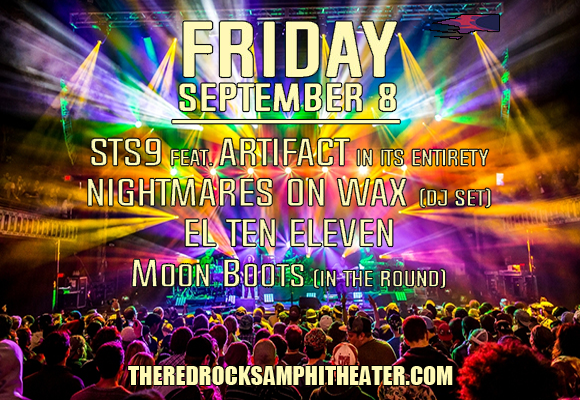 Sound Tribe Sector Nine (also known as STS9) is an instrumental electronic rock band that was formed in Atlanta, Georgia, in 1998. Marrying typical rock instrumentation with electronics, and with a passion for group improvisation, the band are known for their incredible live performances and extensive touring. They have ranked among Pollstar Magazine’s list of top-grossing touring acts and headline several festivals every year, having notably performed at Bonnaroo, Wakarusa, Electric Forest, and Suwanee Hulaween to name a few. To date, the band has released 11 studio albums, two remix albums, and multiple live DVDs on their independent label 1320 Records.