DJ/producer Svdden Death is known for his foreboding, apocalyptic sets and impressive stage theatrics that have seen him wearing a Baphomet mask or levitating in a ring of red fire! Now, the Dark Lord of Riddim comes to Red Rocks Amphitheater on Sunday 24th October 2021, and if the blood-red picture of the iconic venue that he posted on Twitter is a foreshadowing of what's to come, fans will be in for a treat…! Get ready to dance out your demons in Svdden Death's Valley of Darkness! 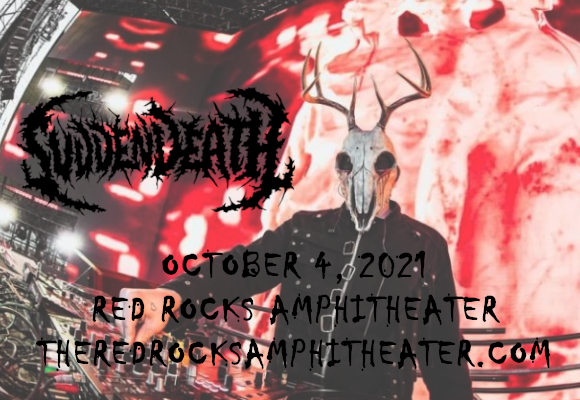 After honing his sound in his native San Jose, dubstep DJ and producer Svdden Death moved to Los Angeles to build himself as an artist and began performing and releasing under his stage name in 2015. His first success came in 2017 when English label Never Say Die released his song "Prismatic" as a single for their seventh Black Friday EP and then went on to sign him. Since then, he has made huge waves throughout the dubstep scene, with tracks like  "Behemoth", "Rise", "Last Life", "Take Ya Head Off", and "Junkworld." His collaborations with artists like  Borgore, Subtronics, and Yakz have proved to be critical smashes, none more so than his 2019 track with Marshmello "Sell Out," which hit number 36 on the Billboard Dance chart.