This summer… get ready for the Southern rock concert of a lifetime! That’s right, the Tedeschi Trucks Band are on tour once again in 2018, wrapping up with two massive weekend performances at the Red Rocks Amphitheater starting Saturday 28th July 2018!! With special support from the Drive By Truckers and The Marcus King Band, this promises to be a truly exceptional show. Experience the sounds of the Tedeschi Trucks band and soak up the incredible atmosphere of the world’s most iconic venue – get your tickets good and early while you can!! 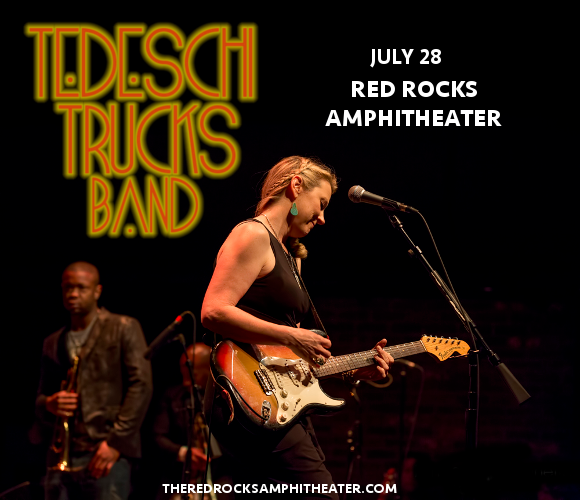 Since 2010, the Tedeschi Trucks Band have been delighting audiences the world over with their bluesy, soul-influenced Southern rock sound. This year, the Wheels Of Soul tour is going to be an even more exceptional performance than it has ever been before, with the addition of the Drive By Truckers and The Marcus King Band.

“We all draw from some of the same roots,” Derek Trucks of the Tedeschi Trucks Band said, regarding the bands joining them on tour. “But we also share a different perspective than your typical Southern rock bands do. I have a lot of respect and admiration for the Truckers’ songwriting. It’s an honest take on the world we live in.”

Don’t miss your chance to catch a show that will truly blow you away – if you only see one show this year, make it this one!! Tickets won’t last long – get your place at the Tedeschi Trucks Band concert on the 28th July NOW while you still can!