Get ready for the show of a lifetime: Tedeschi Trucks Band & The Wood Brothers, with Hot Tuna are set to perform at the Red Rocks Amphitheater on Saturday 29th July 2017! Grab your tickets NOW for this sellout show!! 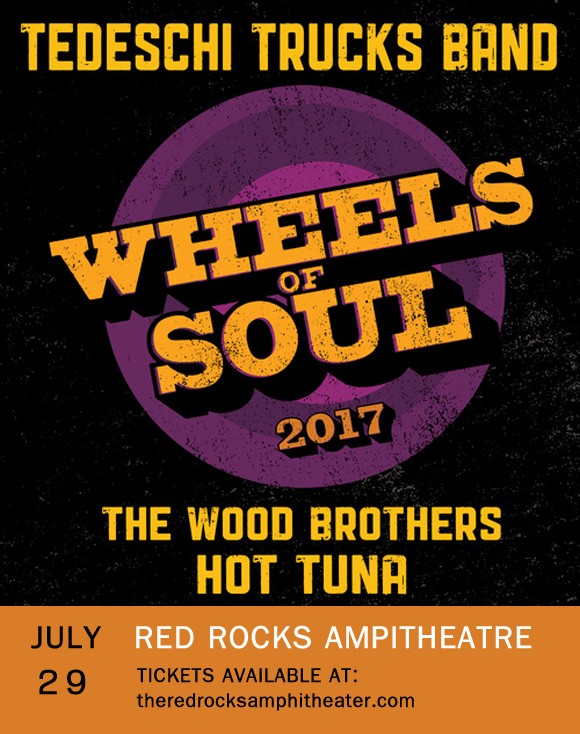 Formed in Jacksonville, Florida, in 2010, and named after the founding members Derek Trucks and Susan Tedeschi, The Tedeschi Trucks Band released their debut album to widespread critical acclaim, picking up the Grammy Award for Best Blues Album along the way. Live, they mix blues and rock, featuring multiple instrumentalists including flute and horns along with Trucks and Tedeschi on vocals. The combination of timbres combined with Tedeschi's full, powerful vocal create a truly immersive, inviting, and engrossing textured and layered musical atmosphere.

The Wood Brothers consist of brothers Chris and Oliver Wood on upright bass and guitars respectively, and non-brother Jano Rix on multiple other instruments. They found their passion for music in listening to roots music in their childhood around family campfires, inspired by their storytelling mother and musician father. However, the two did not start their musical career together until 15 years after pursuing them solo – now their unique brand of folk has come together, enriched by their own individual influences and experiences. Also in support we have Hot Tuna, consisting of Jefferson Airplane members Jorma Kaukonsen and Jack Casady. Starting as a side project during a halt in Jefferson Airplane's touring schedule in 1969, the act initially opened for the well-known band, performing blues country and blues covers before becoming a distinct act in their own right.

These three bands are going to make for a thrilling evening. Make sure you've got your tickets ready!!