If you didn’t manage to catch their 2017 show at the Red Rocks, now’s your chance! Don’t miss the opportunity to see folk rock legends The Avett Brothers live at Red Rocks Amphitheater on Saturday 30th June 2018! There are still tickets left, but hurry – if their last show was anything to go by, they WILL sell out! 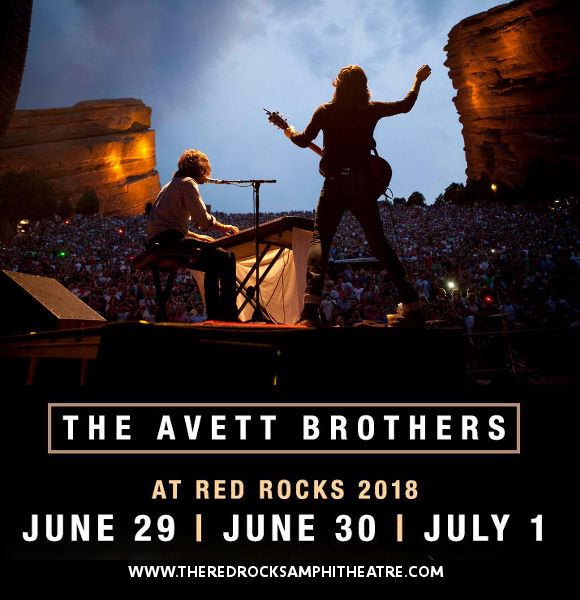 Having barely just finished their documentary, “May It Last: A Portrait of the Avett Brothers”, aired in 2017, the restless group are back on the road again. Founded by multi-instrumentalist brothers Scott and Seth Avett with bassist and violinist Bob Crawford and cellist Joe Kwon, the Avett Brothers were formed in 2000, as a folllow-on project from the brother’s previous band Nemo. As Nemo disbanded, Scott and Seth continued working together, writing the material that would make up their first album, “Country Was”. Touring extensively to promote it, they then began work on their second album, “A Carolina Jubilee”, and it was at this point that the brother’s skill for diversity and crossover within and between genres really became apparent! In 2007, The Avett Brothers won the Americana Music Award for Emerging Artist of the Year, and in the years that followed, won a further 3 in addition to being nominated for 3 Grammys!

Don’t miss your chance to see the Avett Brothers’ eclectic and immensely popular brand of Americana LIVE – book your tickets NOW while they last!!!