Are you down to boogie?! The Grammy Award-winning blues-rock band hailing from Akron is back to hit the road on the recently-announced Dropout Boogie Tour, taking a pitstop at Red Rocks Amphitheater on Wednesday, July 13, 2022. In support of The Black Keys' tour, joining them is the indie-favorite Band of Horses. Just last year, The Black Keys dropped their tenth studio record, Delta Kream, featuring covers of Mississippi hill country blues, revisiting their blues-rock roots. Over the last 20 years, The Black Keys made a mark with indie-favorite smash hits including "Little Black Submarines", "10 A.M. Automatic", "Tighten Up", "Howlin' for You", and "Lonely Boy". The band is calling fans to join them on the dancefloor, so book those tickets now, and get ready to boogie! 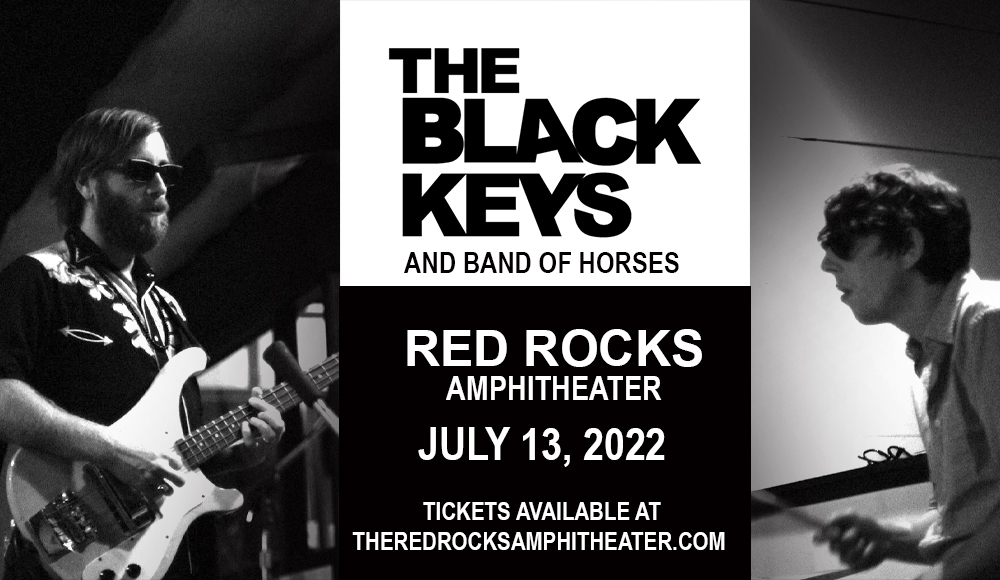 “The hill country blues Renaissance in the early 2000s felt like such a revelation,” says frontman Dan Auerbach about their latest record, Delta Kream. As the band enters a new era after about two decades of making music, The Black Keys revisits blues-rock rooted in their musical veins that led them to where they are now.

Dan Auerbach and Patrick Carney started jamming together in 1996, and from then on carried a journey of music together. In 2001, Auerbach, who wanted to record a demo, asked help from Patrick who would provide recording equipment and his basement as long as Dan would recruit other musicians. None of those invited showed up which led to Dan and Patrick jamming together instead. They recorded demos of "old blues rip-offs and words made up on the spot" said the duo.

From a basement stint, the duo amassed a following and five Grammy Awards throughout two decades in the music industry. With ten studio albums including the 2x Platinum "Brothers" and 2x Platinum "El Camino", in the roster, their most notable hits include "Tighten Up", "Howlin' for You", "Lonely Boy", "Gold on the Ceiling", and much more.

After a rough 2 years with the pandemic affecting the live music scene, The Black Keys is finally back on the road to meet fans and take them back a two-decade journey in the making across their favorite hits and crowd-favorite tracks. It's definitely the time to boogie and celebrate the return of your favorite Black Keys hits live on stage. Book your tickets now!