The Black Keys made their triumphant return to music last year, after a four-year hiatus, with the album Let's Rock! The duo has extended its 2019 tour to promote the album, and it's coming to Red Rocks Amphitheater on Wednesday 15th July 2020 for a night of down and dirty blues-rock! There is something breathtaking about a band that can create such a powerful sound out of such a simple set-up, and The Black Keys' music has a rare, magnetic pull that speaks to the very soul of you! Joining the band will be special guest support act and Grammy Award-winner Gary Clark Jr! 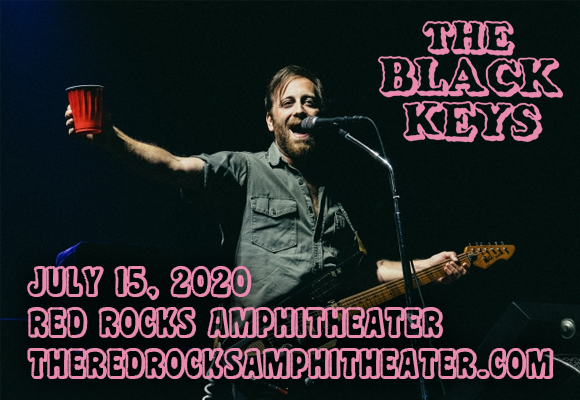 Childhood friends from the same neighborhood in Akron, Ohio, Dan Auerbach (guitar, vocals) and Patrick Carney (drums) formed The Black Keys in 2001, having both dropped out of college. Influenced by bluesmen like Junior Kimbrough, Howlin' Wolf, and Robert Johnson, they began creating dynamic, unpretentious blues rock in their garage, recording in basements and self-producing their records. Their debut album, The Big Come Up, was released in 2002 and the duo began to garner a cult following from playing intimate shows that showcased their exceptional talent as a two-piece. Over several years, their career steadily grew through word of mouth, popular releases, and collaborations with producers like Danger Mouse. In 2010, the band finally got its big break with the album Brothers, which won three Grammy Awards, including Best Alternative Music Album, and reached number three on the Billboard 200. After that, the duo released three more albums that hit the top five of the Billboard 200, including 2013's El Camino, which won them three more Grammy Awards. In 2015, the band embarked upon a hiatus but reunited in 2019 to release the album Let's Rock.