The Decemberists' four-year hiatus ends now. And the long wait of their fans is finally over! The Decemberists comes to Red Rocks Amphitheater on Wednesday 27th May 2015, in a tour co-headlined with indie-art rock band Spoon. Indeed, this indie-folk rock band are making history once again. And yes, you could witness and experience a historical and music-filled adventure. If you think you're too old or too out of place for cosplay, you'll find your heart and home right at this stage. All you need is a ticket and you're in for the ride of your life! 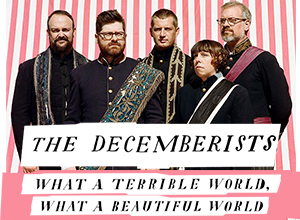 One of The Decemberists' final sightings was at The Grammy's in 2011, for their nomination for Best Rock Song for the track "Down By the Water", from the album "The King Is Dead'. And who knows what happened during their four year hibernation. But that doesn't matter now. That was history. Now, they've awakened and lived to tell new stories. With fans eagerly awaiting for their return, they definitely are listening…

Their seventh full-length album "What a Terrible World, What a Beautiful World" opened 2015 with a bang. And promises an even more explosive year as they embarked on a tour that covered Europe and the U.S. Of course, their fans are raring to hear new stories ranging from the whimsical, to folklorish, to the intriguing, dark political and historical events. What to expect from their live shows? Audience participation is a must. Be prepared to help the band re-enact century-old events like sea battles or a revolution. Also, sharing the stage with The Decemberists are psychedelic indie rock band, Spoon.

Now isn't that a concert-full of fun, music, and history rolled into one amazing show that only The Decemberists could pull-off! Hurry scurry for tickets before they become history!