In the space where old-time bluegrass meets jazz exists Santa Cruz band The Devil Makes Three! The group brings its thoroughly entertaining, swashbuckling Americana to Red Rocks Amphitheater on Friday 24th May 2019 as part of its 2019 Winter Tour, and will be performing tracks from the album Chains Are Broken! The band will be joined in support by Memphis country-punk rockers Lucero! 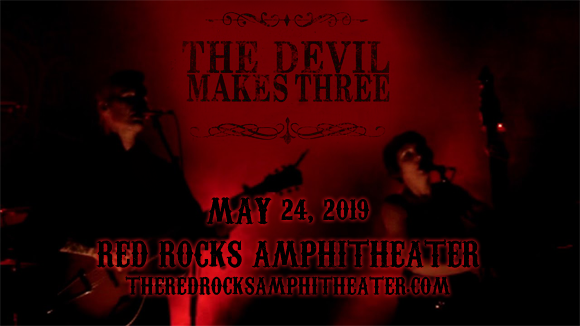 Consisting of guitarist Pete Bernhard, upright bassist Lucia Turino, and guitarist and tenor banjo player Cooper McBean, The Devil Makes Three is an Americana band, formed in Santa Cruz, California, in 2002. That same year, they released their debut album; a self-titled independent release, followed by Longjohns, Boots, And A Belt in 2004. To date, the group has released six full-length albums, including Chains Are Broken – their most recent release, which came out in May 2018. The band has also released two live albums, and is well known on the festival circuit for its entertaining live shows. The group has toured with a diverse array of artists, including Willie Nelson, Emmylou Harris and Rodney Crowell, Trampled By Turtles and the Old Crow Medicine Show.