Get ready to experience The Dirty Heads at their very best as they come to perform LIVE at the Red Rocks Amphitheater on Thursday 1st July 2021! If you love Alternative rock then make sure to be a part of the crowd at Red Rocks, join in the Summer fun and make the season one to remember! Nothing beats a combination of feel good music, sunshine and friends – tickets on sale NOW! 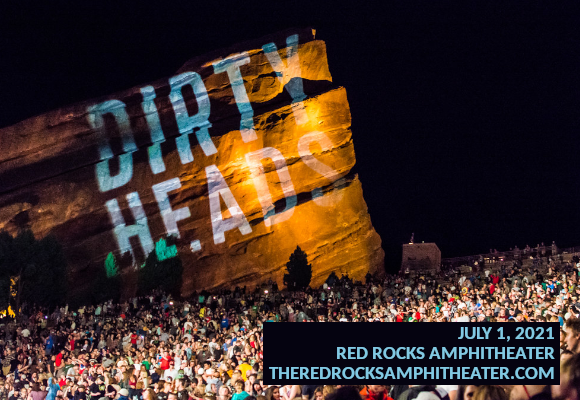 The alternative rockers The Dirty Heads have transformed their career into a long standing name on the charts and live music scene. Hailing from California, the talented band quickly became known as they performed at local venues within the area. With their debut album release in 2008 with Any Port in a Storm they hit the ball rolling towards mainstream appeal and found themselves at number one in the Billboard Alternative Songs charts with singles from the record.

The Dirty Heads have rocketed to the top and stayed at the top of their game throughout the past decade, often included along side the likes of Sublime with Rome, 311 and Pepper and they have also hit the stage along side Cobra Starship, AER and Gym Class Heroes as their soundscape it so well suited to the feel good alternative rock scene.

The Dirty Heads give a unique element to the music scene as they have combined elements from all kinds of genres with hints of Alternative hip hop, ska, acoustic rock, alternative rock, reggae fusion and reggae rock.

If you love The Dirty Heads and their incredible music, don't miss out on your chance to catch them live in concert this Summer as they embark on their tour to bring their album Super Moon to the stage!

Red Rocks is the perfect place to see The Dirty Heads LIVE – what could be better then enjoy the summer sun and evening with the uplifting sounds from the Dirty Heads?!