Are you ready for this years BISCO INFERNO?? The Disco Biscuits return once again to the Red Rocks Amphitheater with a sizzling show featuring support from Spafford and Organ Freeman! It’s going to be an incredible night – don’t miss out! Get your tickets NOW while they last!! 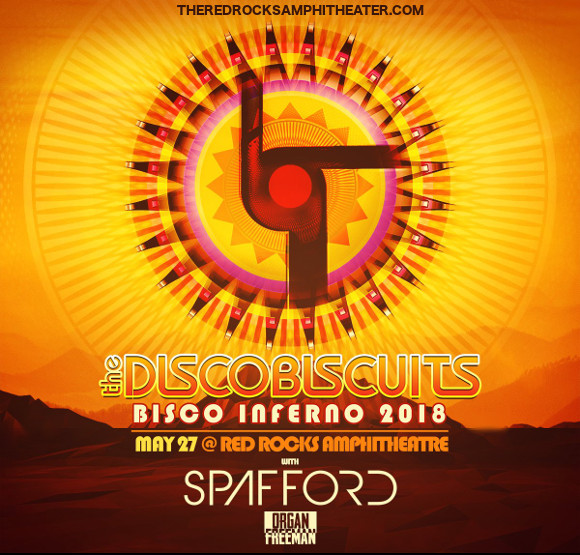 Formed in 1995, the Disco Biscuits were originally a Phish cover band. Gaining plenty of attention for that, they quickly moved on to creating their own music – and the best party nights their fans could ask for! This evolved into the creation of Camp Bisco, an annual festival run by the band to combine the worlds of rock and EDM in one place. For over 17 years, they’ve been running the hugely successful Camp Bisco – and now, they’re bringing the show to the Red Rocks Amphitheater once again!

As for Spafford, they’ve had a phenomenal year in 2017, touring around the world and growing their fanbase to astronomical levels! Previous collaborators with the Disco Biscuits, with keyboardist Aron Magner joining Spafford onstage at Suwannee Hulaween for an incredible cover of Tears For Fears’ “Mad World,” they’re the perfect band to get you in the mood for the headlining act.

Opening the show is Organ Freeman. As the name implies, they’re all about the jazz as well as the funk! Having just completed their largest tour yet, they’ll be playing songs from their second EP, the stunning “Respect My Art”.

Get ready for an incredible show at the world’s most beautiful venue – book your tickets today, before they sell out!