The Head and The Heart Tickets

Fans of indie folk, we have an unmissable show coming up for you. The Head and The Heart will be the iconic Red Rocks Amphitheater on Thursday 3rd August 2017 with support from Grouplove!! On tour with their third album “Signs of Light,” prepare to get lost in the music in the magical Red Rocks atmosphere with The Head and Heart this summer. Get your tickets early to avoid disappointment – this will be a sellout show!! 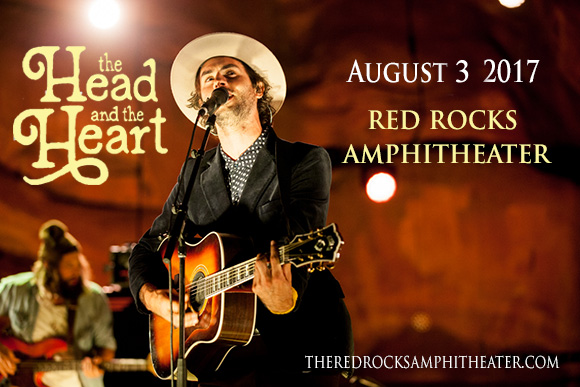 With their introverted, peaceful songs, “Let's Be Still,” “Take a Walk,” and “Lost in My Mind,” The Head And The Heart have a comforting softness to them – nothing too harsh or jarring usually sounds, and its gained them a huge worldwide following. Their latest album, “Signs of Light,” however, promises a few gentle nudges in new directions, according to Jonathan Russell. "It felt like a bridge between what we have been doing musically and what we're leaning towards,” he explains. “There are definitely songs on the record that are more examples of a direction that people haven't seen us go in. It felt like this record had a foot in the past and a foot in the future." So far the album has been a huge success, debuting on the US Billboard 200 at number 5 and selling 40,000 equivalent-album units in its first week!

We're very excited to see what progression The Head and The Heart will take next – if their current work is anything to go by, we can only expect wonderful things!!