Lock-in this red-hot date: Friday, 12th July 2019. Rockin' at the Red Rocks Amphitheater is The Motet, a seven-piece band from Denver, Colorado. Known for breaking new grounds and pushing boundaries with their concoction of funk, jazz, afrobeat, and soul, The Motet has collected quite a mass of loyal followers and spawning a new set of fans along the way, who are drawn to their unique sound. With both sets of audiences wanting to catch The Motet, it comes as no surprise that tickets are on the move. Secure your space to move and groove with this extraordinary treat from The Motet. Book your tickets now! 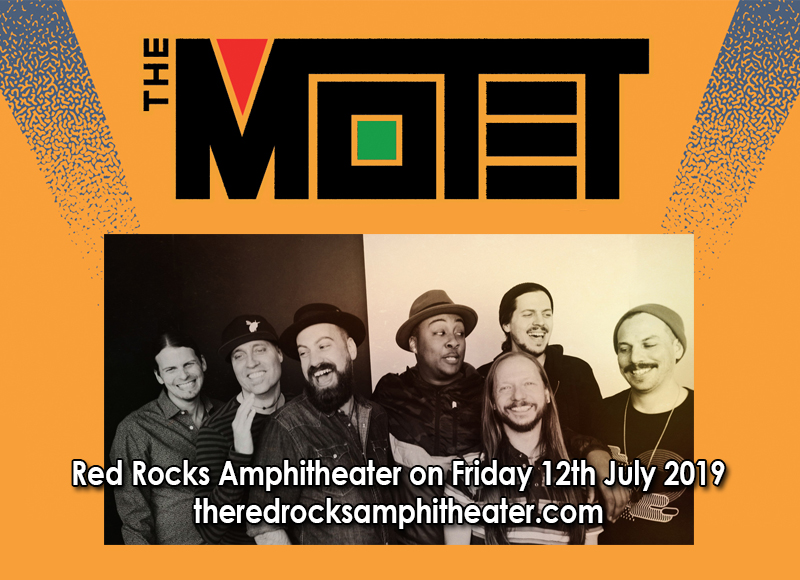 The Motet has its roots in Denver, Colorado, founded by drummer and bandleader Dave Watts in 1998. He started this music collective with a revolving-member line-up until he settled into its current members which include guitarist Ryan Jalbert, bassist Garrett Sayers, keyboardist Joey Porter, trumpeter Parris Fleming, vocalist Lyle Divinsky, and saxophonist Drew Sayers. The Motet has released seven studio albums to date. Their notable works include 1999's "Breathe", "Dig Deep" in 2009, and their self-titled album in 2014 which was recorded on analog equipment.

The Motet's are regular performers in major music festivals like Bonnaroo, Electric Forest Festival, High Sierra Music Festival, North Coast Music Festival, Wakarusa, and Summer Camp Festival. Yet one of their most awaited gigs is their annual Halloween concerts, where they pick a particular popular band to cover –singing their songs, complete with costumes, props and the works. Some of the artists they covered include Earth, Wind, and Fire, Parliament Funkadelic, Tower of Power, Jamiroquai, Stevie Wonder, and Prince.

With their unique and groundbreaking approach to their brand of music, The Motet's live show is bursting to the seams with a dynamic, energized party vibe that would keep you on your feet from beginning to end. Get into the beat and enjoy that quirky funk sound that can only come from The Motet.