Are you ready to experience The Revivalists LIVE in concert?! Well here's your chance as they return to the Red Rocks Amphitheater on Friday 10th June 2022 (Rescheduled from Friday 11th June 2021) for another amazing performance! The Revivalists are one of the most exciting bands to see on stage as they radiate uplifting energy and entertain each and every crowd… make sure you secure your tickets for their special date at Red Rocks this summer season! You won't regret it! 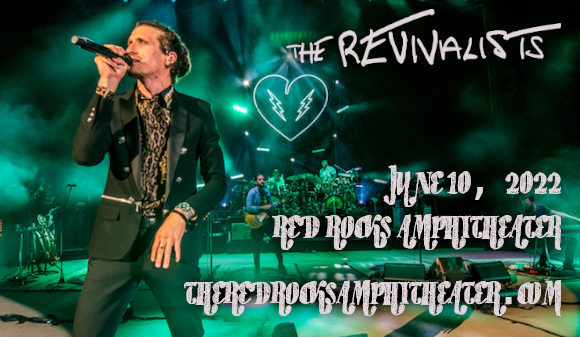 The Revivalists have gained a steady reputation for their feel good atmosphere they create when performing live on stage. As they give the crowd exactly what they want, with a perfect collection of songs for an unforgettable experience, they are one of the most exciting bands right now to see live in concert – making tickets for their 2022 dates sell out faster than ever!

Ever since they transformed the music scene back in 2007, they have continued to progress and make their way up on the charts with their energetic soundscape. The Revivalists are of course; Ed Williams (pedal steel guitar, guitar), David Shaw (lead vocals), Zack Feinberg (guitar), Rob Ingraham (saxophone), George Gekas (bass guitar), Andrew Campanelli (drums, percussion), and Michael Girardot (keyboards, trumpet). They have described themselves previously as "a Crescent City-rhythm spin on jam-band jubilee."

This talented group have dropped some incredible releases in their time, from their album Men Amongst Mountains album which led them to be titled as one of the "10 Bands You Need to Know" by Rolling Stone magazine. And their 2016 single release of "Wish I Knew You" which once again gained them success, placing them at number one on the Adult Alternative Songs char and the mainstream Alternative Songs chart! Together the members have reached mind blowing triumphs and received nothing but positive reviews from music critics across the globe.

The Revivalists have proven they have what it takes to go far and are continuing their career with plenty more music to get stuck into… 2022 brings them once again back to the stage and as a popular favorite at the Red Rocks venue – you'd be crazy to miss this particular showcase! Get ready to be blown away by The Revivalists as they grace the stage and bring their biggest songs to date! There's no better place to be this coming summer!