It's the first night of the The String Cheese Incident's 3 spectacular shows at to Red Rocks Amphitheater on Friday 24th July 2015! Known for their spontaneous live style, The String Cheese Incident stay true to their roots with instrumentation of mandolin, violin and guitars. With vivid colorful light shows, electrifying music, circus skills, stage props, inflatable jelly fish and many more, their shows are an unmissable mix of events and each is unique to the next! It's time to get ready for foot stomping bluegrass country and mind blowing progressive rock on this exciting summer night! 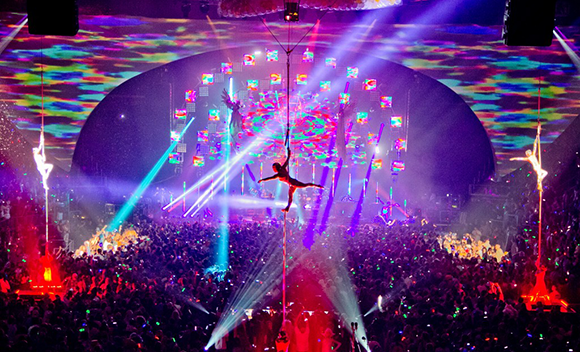 Their jaw dropping live shows, unplanned 'incidents' as the band refers to them has defined everything about The String Cheese Incident. From the word go, they created an awesome buzz around them that drew fans to concerts, as the band grew in success, so did their stage spectaculars which included acrobatics, circus tricks and vivid rainbow lighting which fills every arena from the front to the back of the crowd. Naturally, this encouraged more people to attend and so the circle was formed. It is hard to pin down one specific genre to describe this wonderful band, they combine rock, electronica, calypso, country, funk, jazz, Latin, progressive rock, reggae, bluegrass and so much more!