Grammy Award-nominated Americana trio The Wood Brothers are bringing their 2019 tour to Red Rocks Amphitheater on Thursday 5th September 2019! The three-piece perform soulful, rootsy folk music that makes you want to dance, and for this show they'll be bringing brand new songs from their latest album, One Drop of Truth, to the stage! Joining them will be the incredible Lakestreet Dive in support! 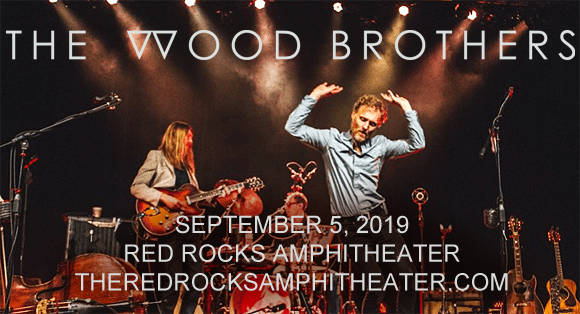 Formed of brothers Chris (upright bass) and Oliver Wood (acoustic and electric guitars), as well as multi-instrumentalist Jano Rix, The Wood Brothers are an American folk band that formed in 2004. The group came together after fifteen years of the siblings playing separately (Oliver touring with Tinsley Ellis and Chris as part of Medeski Martin & Wood). The three-piece recorded a demo together, leading to a contract with Blue Note Records, with whom they released their debut album, Ways Not To Lose, in 2006. To date, the band has release seven studio albums, including one covers album (Up Above My Head (2009)). Their seventh and most recent album, One Drop of Truth, was nominated for the Best Americana Album award at the 61st Grammy Awards.